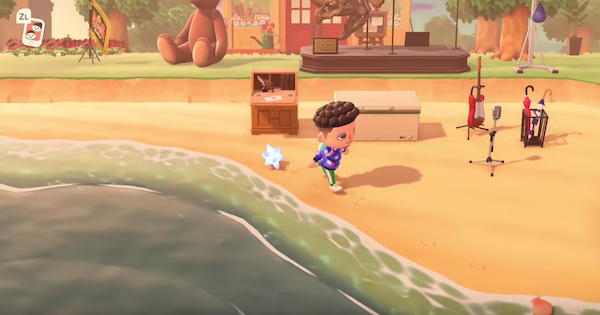 Animal Crossing | ACNH
Large Star Fragment - How To Get

How To Get Star Fragments

If you want to see what wishing upon a star looks like in-game, check out the video guide we've put together above!

How To Get Large Star Fragments

Getting Large Star Fragments ultimately appears to be random, but is otherwise identical to getting Regular Star Fragments, meaning you'll have to wish upon shooting stars!

After wishing 100 times during a Meteor Shower, we received only 3 Large Star Fragments and only 1 Zodiac Fragment. This suggests that getting them is largely up to chance, so make sure to wish as many times as you possibly can!

Meteor Showers Are Announced In The Morning

In order to get Star Fragments, you'll need to have a Meteor Show appear over your island! You'll be told a Meteor Shower is coming during the daily morning announcements, so make sure to check every day!

Changing The Date Is Also Possible

It's also possible to change time to a new day so you can keep trying for a Meteor Shower, though we don't recommend this.

Wish Upon A Shooting Star

On the night of a Meteor Shower, you'll be able to see a star falling off in the distant night sky. When you see this, unequip any items you're holding and press the A Button. Pray to that star as many times as you can - the number of Fragments you get is determined by how many wishes you get off!

Pick Up Star Fragments The Next Day On The Beach

When you head to the beach the next day, you'll find Star Fragments scattered on the sand. Check every corner of your island's beaches to make sure you don't miss any Fragments!

One Large Star Fragment is required to make the Star Wand. This item can be obtained from Celeste

You can get other space-related DIY Recipes by talking to Celeste whenever she appears!

Check Out More About Celeste Here!

All star fragments cannot be sold.

Anyone have star fragments each one i s 20,000. Give me your island code ill be there in 10 mins

Is there a sell price for the Zodiac and Large Star Fragments, or can they not be sold?

I made over 200 wishes and can’t find any large fragments :(
Got one zodiac