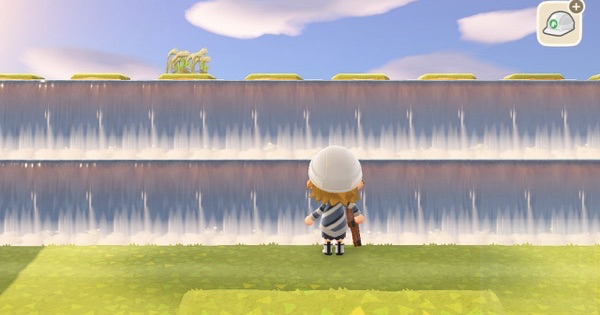 Read this Animal Crossing: New Horizons Switch (ACNH) guide on how to make waterfalls! Learn how to use the island designer to build multi-level waterfalls, and a waterfall island!!

How To Make Cliffs

Need To Unlock The Island Designer

In order to creater waterfalls, you'll need to use the Island Designer tool. In addition to this, you'll need to have the Cliff-Construction and Waterscaping permits as well. These licenses can be obtained by spending Miles!

Check Out How To Unlock The Island Designer Here!

2x3 Is The Minimum Size

Waterfalls cannot be placed on edges or corners! This means that you'll need at minimum a 2x3 sized cliff in order to make them.

Flatten The Land In Your Workspace

You won't be able to build cliffs on tiles which are occupied by trees, weeds, or furniture. Decide in advance where you'll be building your cliff & flatten out the entire area. Removing trees by eating a fruit and uprooting them yourself is more efficient than using the Island Designer in this case!

How To Create Unique Waterfalls

You can't stack cliffs directly on top of each other. This means you'll have to approach your construction as if it were a pyramid, with the base being larger than the subsequent upper levels. Also note that 2 stories is the maximum - you cannot create 3 story cliffs.

The important thing here is to create the central island first! This will let you get a sense of how large of a space you'll need. If you start with the outside layer first, it can be hard to judge proportions. Also, if you make the island part second, you might need to use the emergency rescue service to get out!

You can't access layer four apparently it's too dangerous to climb any higher only apparently Isabelle can get up there . You might not know but
Isabelle is called Isabelle because the tuft on her hair looks like a bell so she Is-a-bell.

Nobody mentioned that you can't build a waterfall on layer four!