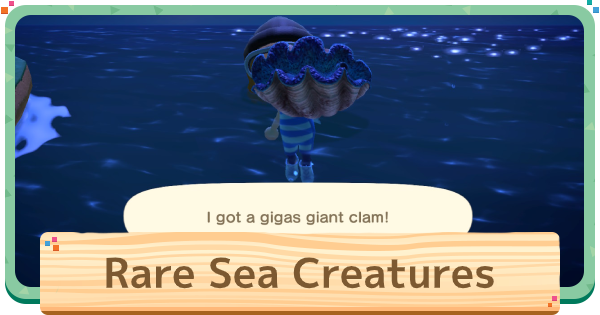 Check out this Animal Crossing New Horizons (ACNH) guide on rare sea creatures! Get a list of the rarest deep sea creatures, best creatures to sell, & how to tell them apart!!!

Check Out More Info On The Summer Update Here

Rare Sea Creatures You Can Catch This Month

※ Tap the buttons below to view sea creatures for each respective hemisphere!!!

※ Tap the buttons below to view sea creatures for each respective hemisphere!!!

If a creature is fast (meaning you can't catch up to with A-Spam swimming), it's likely rare. This makes Rare Sea Creatures relatively easy to spot! Remember to approach fast creatures slowly by not pressing A! Consult the Sea Creatures List to see shadow sizes and speeds!

> Check Out The Fastest Creatures Here

If a sea creature has a large shadow AND moves fast, it's almost certainly rare. If it doesn't move, it's likely a Sea Anemone or Seaweed, so you can feel free to ignore those. If you see a big shadow move, absolutely go after it!

How To Get Pearls

Can Get By Diving

Pearls can be obtained by diving in the water and picking them up, just like Sea Creatures. Their sale price is quite high, and are used for Mermaid set DIY Recipes, so you'll want to stock up on them!

Cannot Be Donated To Blathers

Pearls are not considered a Sea Creature, meaning they can't be given to Blathers in the museum. They are instead treated as a DIY crafting material!

By giving Pascal a Scallop whenever he appears, you'll have a random chance of getting either a Pearl or a DIY Recipe. You can do this once per day, so make sure you hunt for Scallops and do this regularly!

Check Out More On Pascal Here