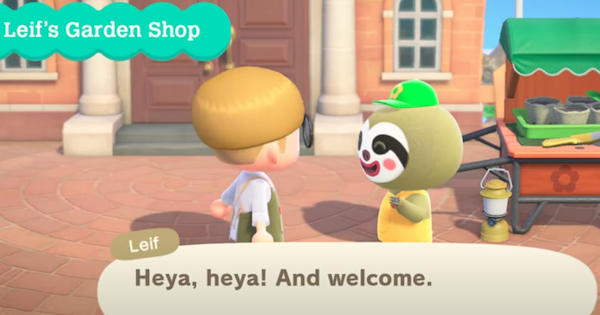 Animal Crossing | ACNH
Leif & Garden Shop - Location & How To Get

Read this Animal Crossing New Horizons Switch (ACNH) guide on Leif the sloth. Find out if Leif gets a Shop, if he comes every day, what to do if he's not showing up, items, & more!!

Leif will purchase weeds from you for double the price of Nook's Cranny. He'll pay 20 Bells per clump of weeds!

Make sure to purchase everything you need from Leif because his Garden Shop closes at 10PM, on the dot!

You can check if Leif appears when you start up your game. The camera always follows a random villager and sometimes it lands on a special villager that is visiting that day!

How To Get Leif To Show Up

To be able to bring Leif and his Garden Shop to your island, your game needs to be updated to version 1.2.0. This is part of the free update released on April 23, 2020.

What If Leif Isn't Showing Up?

Leif Will Randomly Appear During The Week

Even if you update your game, there is simply no surefire way of making Leif appear on the same day of the update. It's best to wait for him to come visit your island. He will not come every day, so it's a matter of being patient.

Will Not Appear If There's Another Vendor

If there is another vendor in the plaza such as Label or Kicks, Leif will not appear on your island. Check the next day when your plaza does not have any other pop-up shops.

Play After The Game Update

Make sure to close the game software and then update to version 1.2.0 to have a high chance of Leif appearing when you start up the game again.

What You Can Buy From Leif

You can purchase shrubs and rare flower seeds at Leif's Garden Shop. See the guide below for the lineup.

Check Out All Shrub List & How To Get Them!

Info below is based on Northern Hemisphere!!

The Host Of Earth Day

Leif is a special character in Animal Crossing who is set to appear during this year's Earth Day event, scheduled to occur at the end of April. Leif has a similar role to Zipper during Bunny Day!

You can purchase new plant item Shrubs (ex. "Azalea start" and "Tea-olive start") from Leif. Leif will be at the plaza during the event.

In previous Animal Crossing titles, Leif operated a shop in which you could buy gardening supplies like flowers, weeds, another plants. He also offered a weeding service!

Although Leif operated his own brick-and-mortar store in New Leaf, it doesn't seem like you can get Leif to build a permanent shop on your island in New Horizons! At least, not yet. Perhaps this will be added in a future update?

Leif also served as the host of a separate weed-pulling challenge! Such a challenge doesn't seem to exist in New Horizons so far, so it's possible that Earth Day will feature something similar!

does anyone have leif on their island today?

GUYS I MADE A FLOWER FARM AND FLOWER BUGS GO ON THE FLOWERS AND I CATCH THEM AND NOW I SELL THEM AND AM RICH!!!!! AM SORRY IF LEIF DOSENT COME TO YOUR ISLAND THAT MUCH ;(

Guys... I missed redd and now i cant get any paintings ;-;

Leif comes every two days on Palpadloc (my island)

I had both azalea and hydrangea when he visited.