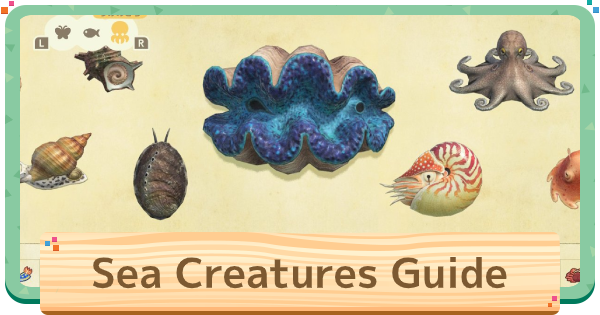 The following are sea creatures confirmed in the official trailer

Do Sea Creatures Have Seasonality?

Check Out Other Seasonal DIY Recipes From Here

※ The following information is from Animal Crossing: New Leaf.
It is included to give players an idea of what kind of sea creatures existed in past titles.

How To Catch Sea Creatures

You can catch sea creatures by diving underwater. You can see the shadow of sea creatures so perhaps you'll be able to identify their exact species just by looking?

You Need The Wet Suit To Dive

In order to start diving, you'll need to purchase a Wet Suit. The Wetsuit can be purchased at Nook's Cranny after you've updated to Ver. 1.3.0. You can also wear the Snorkel Mask while gathering sea creatures too!