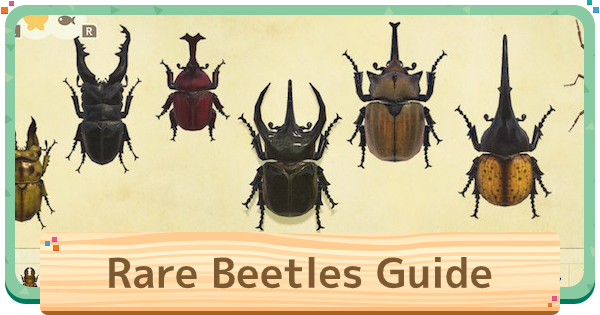 How To Farm Beetles On Mystery Islands

If you're going for the rarest beetles, Stags and Horned, Bamboo Island is your best bet! First, walk through the island and scatter the petals of all flowers (to limit the bugs that spawn). Then, start going after beetles on palm trees!

Our second-place recommendation is islands with only trees on them. On this island only Horned dynastids will spawn, which is great but the sheer number of trees makes it has the opposite effect of making them harder to find. We recommend bringing an axe and cutting down all non-Palm trees.

Generally speaking going after 7pm will let you catch most high-value beetles. However, the Giant stag actually only spawns after 11pm, and it goes for a whopping 11,000 Bells, so we recommend going after this time.

Find Most Near Palm Trees

Beetles will generally spawn on trees, with some exceptions. The majority of rare beetles (Stags and Horned) will spawn on Palm Trees! The rarer they get, the more sensitive they are to sound, so even just walking normally will scare them away. Approach them very carefully!

Check Out How To Plant Palm Trees Here

Spawn Only During Summer

Stag and Horned Beetles, the two rarest and most expensive varieties, are summer bugs, found in July/August in the North and January/February in the South. Make sure to focus on getting these during the summer!

At their most expensive, rare beetles can sell for up to 12,000 bells! Even on the lower end, some rare ones will go for about 6,000, making them a great way to make tons of money.

If you give Flick 3 of the same type, you'll get a special model of that bug! These can look pretty badass, so try decorating your room with them!