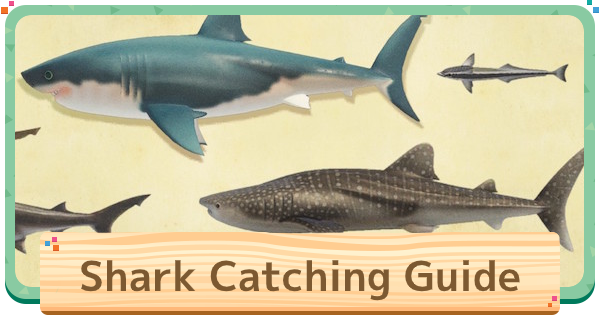 Check out this Animal Crossing: New Horizons Switch (ACNH) Shark Island Guide. Includes shadows, times, prices, how to catch sharks, & how to get to shark island!!!

Shark Island - How to Get

What Is Shark Island?

During months when sharks are catchable, if you go on a Mystery Island Tour, you'll have a chance to get "Shark Island". The chance of getting this island is quite low, but if you get here you'll be able to easily catch all sharks, as that's all that spawns!

Nothing To Do But Try Over And Over

There is no surefire way to get to Shark Island. Your only option will be to repeatedly buy Nook Miles Tickets and try to get lucky - the probability is quite low. Also, every time you try, don't forget to completely empty your inventory!

Only Bring Back Rare Sharks

If you happen to get Shark Island, fish there to your heart's content. Try to avoid holding onto Suckerfish and Hammerhead Sharks, as they sell for the least. This is such a rare opportunity that you'll want to make the most of it - bring back only sharks that sell for over 10,000!

On Mystery Islands, the critters (Fish and bugs) which spawn are determined the moment you set foot on the island! This means that if you arrive on the island before 4 pm, no matter how much time passes, the fish that only appear after 4pm will not spawn! Always go after 4 pm!

When Do Sharks Spawn?

Only Spawn From June To September

Sharks are basically a summer animal, they'll be active from June to September in the North, and December to March in the South. They're only available for a limited time, so if you're not planning on using Time Travel, this is your chance to get them!

There is actually one other fish with a fin - the Ocean Sunfish. This fish will become catchable starting in July (or January in the South), so this means finned fish will be exclusively sharks only for the month of June (or December)!

> Check Out The Ocean Sunfish

Shark Type - How To Catch

All Sharks Are Finned

The most defining characteristic of sharks is that their shadow has a fin! All 5 varieties of shark share this shadow icon, so it's not possible to tell which shark you're going to fish up.

When farming Sharks, you'll only want to pay attention to finned fish. This means if you see any other shadow, run close to it to scatter it.

The main benefit to sharks is that they sell well! At their highest you can get 15,000 bells for one shark! Even the cheapest among them, the Suckerfish, goes for a respectable 1500 bells.

They Look Awesome As Models

If you give CJ 3 of the same type of fish, he'll turn them into a model which you can use to decorate your island! If you decide you don't want to sell any more, why not try to recreate Shark Week on your island instead?

I have caught all of the sharks on my island

They may spawn usually at those times but I was able to catch a saw shark at 8:54 a.m.