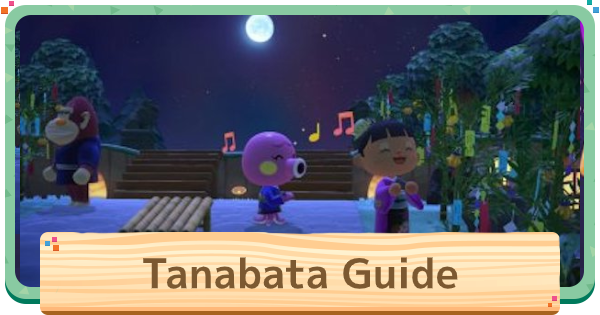 Check out this guide on Tanabata in Animal Crossing New Horizons (ACNH). Learn about Tanabata, or Starcrossed Day in past games, special items, and how to celebrate it.

Check Out All Other Events Here

What Is Tanabata / Star Crossed Day?

Starcrossed Day, or Tanabata as it's known in Japanese, is a special event that occurred in previous Animal Crossing games. Note that this event was only available for players with a Japanese version of the game. It is unclear what will be done with the event in New Horizons.

The official Japanese website provided more info on this update, stating that players will be able to purchase Bamboo Grass from Nook Stop and Nook's Cranny during the month of July.

The fun of Tanabata lies in putting on fancy traditional Japanese clothing and walking around, enjoying the summer night scenery.

During Tanabata, people write wishes on a piece of paper and tie it to a bamboo tree, hoping that they come true. Tanabata is also referred to as the star festival, so perhaps there might be Shooting Stars as well?

Based On A Real Japanese Celebration

Tanabata is based on a real Japanese cultural event, which takes place every year on the 7th of July. The lack of cultural awareness of this holiday in the west may be the reason why the event was limited to Japanese-language Animal Crossing games in the past.

The legend behind this holiday is that Orihime and Hikoboshi, two lovers, are only able to see each other on one day of the year when their stars align. That day happens to be July 7th.

Tanabata In Past Games

Tanabata was not a major event in New Leaf, but it did introduce some items you could buy at shops. It was possible to purchase Bamboo Grass and use it to decorate your home. Isabelle also had some special dialogue related to it which players could read.

We mentioned above that Tanabata was limited to Japanese versions of the game, but in actuality anyone could experience it by going to the island of a Japanese-version player during the event! Perhaps something similar will be possible in New Horizons?