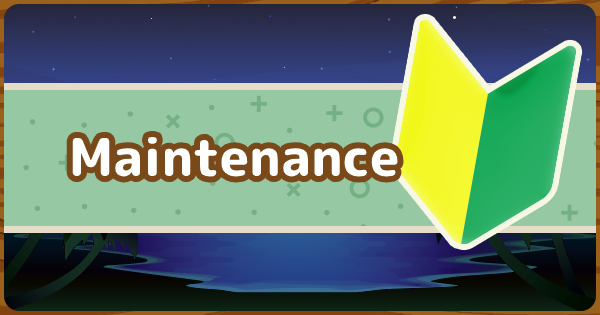 On August 20th (US time) from 20:50 to 22:30 Eastern time (see above for other time zones), Animal Crossing: New Horizons will be undergoing network maintenance service. During this time, some online functions will be unavailable!

Things You Can't Do During Maintenance

↑ The official Japanese twitter account announcing the network maintenance and stating what features can't be accessed during it.

On July 30th from 9:50 ~ 11:30 am Japanese time (see above for US times), Animal Crossing: New Horizons will be undergoing network maintenance service. During this time, some online functions will be unavailable!

A brief 1-hour maintenance was announced on the official Nintendo website, during which many network related services will not be available. This likely includes all multiplayer functions. If previous updates are anything to go off, this likely won't last the full hour.

Maintenance on the internet network of Animal Crossing will take place on July 3rd from 10-11am JST. Check the above chart for your time zone. It's likely you'll still be able to update your game to get the Version 1.3 Summer Update during this time, but some online features, such as traveling to friend's islands, will be unavailable.

Place your cursor over Animal Crossing New Horizons on the Switch's Home screen, press the + button and select "Software Update". This should begin your download!

If you have the game open when you try to update, it might take some time to get the process going. Try shutting down the game before downloading!

"From 10am to 11am on May 22nd (Japan time), Nintendo Switch servers for Animal Crossing New Horizons will be undergoing maintenance. During this maintenance, the game will not be available for play. We respectfully ask for your understanding."

The Japanese Nintendo Support twitter account has announced that there will be a maintenance held on May 22nd from 10am to 11am which will affect Animal Crossing servers only. This is set to last only one hour.

"We have completed maintenance on the Nintendo Switch Online Nook Link application. Thank you very much for your co-operation."

As of 11:05am Japan time, maintenance seems to have been completed and servers should be back to normal.

A new update released on April 23, 2020 has brought new vendors and seasonal events to Animal Crossing: New Horizons. This includes Leif, Redd, and events such as Nature Day, among others.

During the ver. 1.1.4 update, issues regarding Flick's bug models and the spawn rate of Bunny Day eggs have been resolved.

Issues where balloons don't spawn on the island after 300 has been popped were fixed in the ver. 1.1.3 update of Animal Crossing: New Horizons.

In the ver. 1.1.2 update, several issues and bugs were fixed around villagers invited to island, deletion of residents, and more.

A bug where players can duplicate items within the game has been resolved to bring balance back to Animal Crossing: New Horizons.

During launch day of Animal Crossing: New Horizons, an update was released to bring in the online features of the game as well as future seasonal events.

Check Out All Events In-Game!

Patch Or Updates To The Game

Maintenance is when Nintendo applies patches or updates to Animal Crossing: New Horizons. These are not announced in the English sites but are often announced after in the Japanese site.

If you haven't updated your game, you won't be able to access online features of the game. This includes using your Airport to travel or open for visitors, & even send postcards.

Check Out How To Play Online!

Indicated By Maintenance Will Begin Soon

Normally maintenance does not abrupt game time. However, you'll see a flashing sign in-game saying "Maintenance will begin soon" indicating that a new update is available for download.

This code is shown when there is some sort of issue preventing the use of internet-based features. In most situations, this error is caused by server maintenance. Your best bet for a solution will be to wait until after the designated maintenance time and try again.