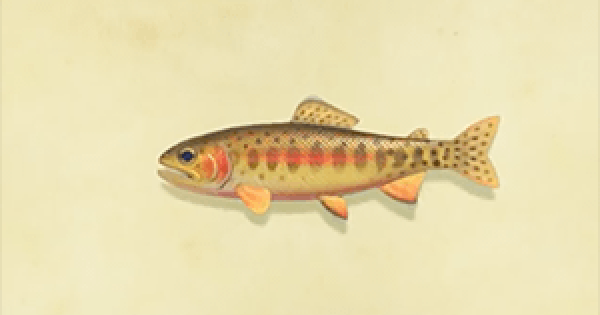 Read this Animal Crossing: New Horizons Switch (ACNH) Guide on Golden trout. Find out the sell price, how to catch, what time of the day and year it spawns, and more!!!

Can Only Be Caught On Cliffs

The Golden Trout is a fish which only inhabits bodies of water found on top of cliffs. As long as the water is on an elevated place reachable with stairs or a ladder, a pond or river are both okay!

Increase The Number Of Cliffs On Your Island

By using the Island Designer tool, you'll be able to make more cliffs on your island, meaning it's possible to increase your chance of catching this fish even without using bait. You'll need to get a rank 3 island rating to unlock this feature, however!

Make Bodies Of Water On The Cliffs

If you want to catch Golden Trout in an efficient manner, you're definitely going to want to use bait. Go fishing after you've made enough bait - the manila clams needed to make the bait can be obtained easier on rainy days, so give that a try!

By using Nook Miles to go on a Mystery Island Tour, you have the chance of ending up on an island with 4 waterfalls. This is an ideal spot for those who don't have the Island Designer Tool unlocked and lack fish bait. If you've got miles to spare, try this method out.

I must just be very unlucky. I have tried for a year. Literally the only fish I can’t catch. Innumerable fishing rods and shovels, I’m at 52M bells from selling fish just trying to catch this thing.

have farmed for 1 hour and caught 2 chars but not one golden trout.

Had a friend fish on my island for 3 hours trying to get the trout. Either this is coincidence or it doesn't spawn on the second level, but the moment I give him some bait and have him fish on the third floor he not only catches one but two in a row.