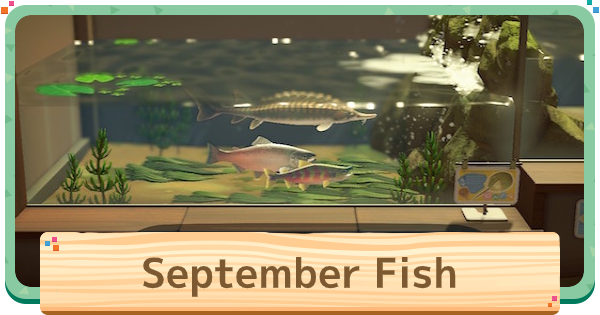 Check this guide on the fish that appear in September in Animal Crossing: New Horizons Switch (ACNH). Find when and where fish appear, expensive fish & fish leaving in September!

September - Fish Which Appear in the Northern Hemisphere

Fish You Can't Catch Next Month

The above two salmon species can only be caught during the month of September (in the Northern Hemisphere). These two fish are relatively easy to catch, so just make sure you do so before the month is over!

Fish with a fin will no longer be catchable once October begins! This means September will be your last chance to get these fish and fill up your Critterpedia.

Fish You Can Catch In September

※ A red border means that fish can't be caught next month (October).

September - Fish Which Appear in the Southern Hemisphere

If you're in the Southern Hemisphere, you'll want to focus on catching String fish this month. These fish can be found in the evening in clifftop rivers and sell for a massive 15,000 bells. They'll be going away in October, so don't miss your chance!

Fish You Can Catch In September

※ A red border means that fish can't be caught next month (October).