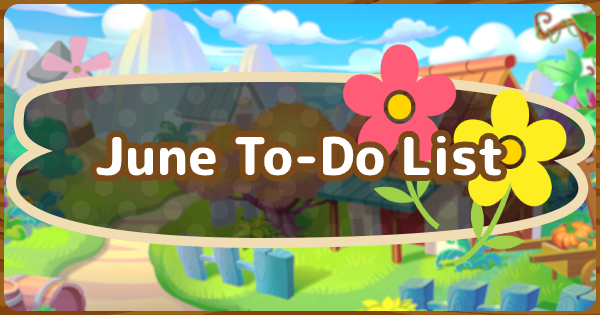 Check out things you should do in June on Animal Crossing New Horizons Switch (ACNH). The guide includes events in June, fish you can get in June, & bugs you can catch in June!!!

Check Out The Daily Routine Here!

During the month of June, players will be able to participate in Wedding Season festivities. The two characters Cyrus & Reese will be commemorating their marriage by taking wedding pictures. Players will help them take the best wedding photo using Photopia feature!

Get All Wedding Season Items

There are a total of 26 items you can get from this event, which will require a total of 261 Heart Crystals. Heart crystals can be obtained only once per day, so assuming you get perfect Heart Crystals, it will still take you about 19 days to get all items. This is something you'll have to constantly do all through June!

Snowfall In The Southern Hemisphere

If you happen to be down under, or have otherwise set your game to the Southern Hemisphere - expect snowfall to hit your island around the middle of the month. This means you'll be able to access the Snowboy event and get cool Winter Seasonal DIY recipes!

Check Out How To Make A Snowboy Here!

Bug Off In The Northern Hemisphere

If you find yourself in the Northern Hemisphere, you can look forward to a Bug Off bug-catching competition on the 27th of June. Flick will come to your island and let you participate in a 3 minute bug-catching spree which can be quite profitable for you! Mark your calendars, this is one you won't want to miss!

Check Out The Bug Off Here

Note: Some characters only appear after you've successfully unlocked them.

Check Out The Event Calendar Here!

The villagers listed above will visit your island at random times. You can expect to see each one roughly 2-3 times a month!

DIY Recipes You Should Get In June

June 1st marks the start of Summer Shell season. These items can be found on the shores of your island, and should be picked up whenever you see them! They are used in DIY Recipes, which can be found in Bottles on the beach or given to you by villagers.

Check Out Summer Shells In Detail

In the Southern Hemisphere, you'll be getting ice-based DIY recipes, in part from Snowboy but also by regular means of obtaining them. The primary ingredient here will be Snowflakes, which you'll be able to pick up in this season as well.

The following fish and bugs will be unavailable to catch for some time once June ends. Make sure to catch them all!

Fish You Can't Catch After June

Check All The Fish You Can Catch In June

Check All The Bugs You Can Catch In June

Summer is the season for Beetles. Although it's true that the rarest and most expensive Beetles won't come out until July, there are two new varieties this month: The Goliath Beetle and Rainbow Stag, which go for 8000 and 6000 bells respectively!

The following fish and bugs will be unavailable to catch for some time once June ends. Make sure to catch them all!

Fish You Can't Catch After June

Check All The Fish You Can Catch In June

There are no bugs in June which you can't catch the following month (July) in the Southern Hemisphere!

Check All The Bugs You Can Catch In June

Villagers Born In Other Months

Couldn't find some of your villagers on here? Wondering which birthdays you missed? Click a specific month to see what villagers have a birthday then!