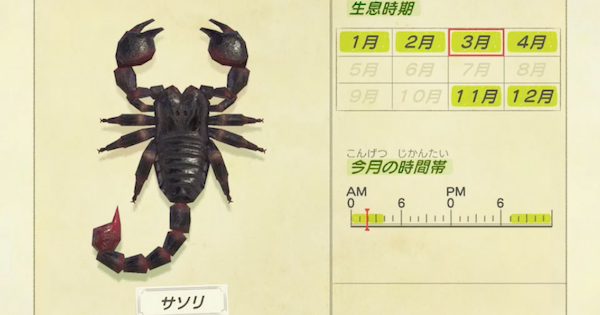 Learn how to catch a Scorpion with this Animal Crossing: New Horizons Switch (ACNH) Guide. Includes scorpion island & how to catch, scorpion price, what time do scorpions come out!!!

When Do Scorpions Spawn

Can Be Found In Scorpion Island

During the Summer, going on a Mystery Island Tour will give you the chance to arrive at the Scorpion Island! This island is home to many scorpions, so you will be able to catch as many as you want!

How To Get To & Make Scorpion Island

Check Out How To Get To Scorpion Island!

How To Make A Scorpion Island

By removing all trees, flowers, and stones from a mystery island, you can increase the spawn rate of scorpions. However, you'll still have 3-4 species of insects appear, and you also need to scatter away any Wharf Roaches that might be lurking around.

Check Out All Mystery Island Types!

In order to increase the chance to encounter scorpions, you need to catch Giant Water Bugs spawning in the pond and release them. Also note that Giant Water Bugs won't spawn when it's raining! This makes it a lot easier to create a scorpion island.

How To Catch A Scorpion

Do not approach a Scorpion from its front becase it will immediately be aware of you. Creep up to it from behind to close the distance without catching its attention.

Will Attack When it Sees Your Net

If you have your Net out, the Scorpion will attack you when it becomes aware of you. Remember that it won't attack unless you are holding your net.

Check Out How to Craft the Net Here

Has A Very Fast Attack

If the Scorpion is about to attack, it will raise its pincers & tail. It will then lunge in to attack your character!

So during June, it’s impossible to make a scorpion island given the new bugs coming out that can’t be scared away?

On June 1st, fireflies and mosquitos make an appearance in the NH, and can't be scared away. Usually I can convert spiral Island into a scorpion ground but not anymore.

Can it be caught in the rain?

They should also point out that scorpion, tarantula, bagworm, and spider (possibly dung beetle) do not come out when you have visitors in your town. So that can be a positive if you're trying to get night bugs and keep getting attacked!

You can use the standard method for tarantulas (hold A, approach slowly, stop when front legs/pinchers are up, continue when they are down).

I can’t confirm whether other methods like digging holes works. Tbh I never found that super effective for tarantulas either.