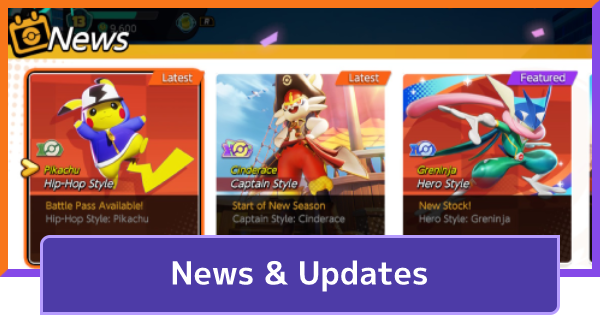 Check out the update & latest news for Pokemon Unite (Pokemon MOBA). Find out all updates about Pokemon Unite, including the latest news, new Pokemon, how to update, patch, and more.

Attention, Trainers! #PokemonUNITE will be in maintenance on September 21 from 2:00PM to 12:00AM PT. During this time, the game will not be playable while we make adjustments and prepare for the mobile launch.

We appreciate your patience and understanding! pic.twitter.com/RLDXmpQp6y

How To Fix Network Errors

Attention, Trainers! ​#PokemonUNITE will be receiving an update on Wednesday, 9/8 at 12AM PDT!

The update for September 8th includes some bug fixes, text adjustments, and shop updates. It is also mentioned that there are change in stats and moves for Blissey The update will be automatically downloaded onto your device and you may be prompted to restart it to apply the patch and new contents.

Pokemon Unite's pre-registration for its mobile version has finally hit the 5 million mark as revealed by their official Twitter post. As a reward, all mobile players will receive the Festival Style: Pikachu skin on launch day. Pokemon Unite is set to release on the iOS and Android on September 22. Players can pre-register by accessing either the Apple App Store or Google Play on their mobile devices.

Upon celebrating the 5 million milestone, the official Twitter account of Pokemon Unite also revealed another milestone. If the number of pre-registered accounts reach 7.5 million, each mobile version player will receive an additional 1,000 Aeos Tickets. These tickets can then be used to buy cosmetic items and upgrades.

How To Pre Register For The Mobile Version

Blastoise is now part of the growing list of Pokemon in Pokemon Unite! It joins the others as a Defender armed with a lot of crowd control moves. Blastoise comes with a small update that will automatically be downloaded once you play Pokemon Unite.

Aside from Blastoise, there are no other changes present with the patch like buffs and nerfs, balance, and bug fixes.

Blastoise To Be Released On September 1st

It is announced that Blastoise will be released on September 1, 2021. There re no further details provided aside from the release date, but we can assume that the moves of Blastoise from the previous BETA will be the same upon its release.

Mobile Version Will Be Released On September 22nd

It was announced on Pokemon Unite's Official Twitter Page that the mobile version for Android & iOS will be released on September 22, 2021. Also, take note that you will receive special rewards when you pre-registered for the game!

During the August 18th Pokemon Presents video announcement, 2 new Pokemon were teased to arrive for Pokemon Unite - Mamoswine & Sylveon. As of yet, the release dates for these 2 Pokemon are still unknown.

This new update introduces Blissey into the roster and includes several buffs, nerfs, and bug fixes. Several Battle Items are also part of this update, losing or gaining stats.  The update will be automatically downloaded onto your device and you may be prompted to restart it to apply the patch and new contents.

The following Pokemon's moves and stats are affected by the August 18 patch:

Battle Items Affected By The Patch

The following Battle Items are affected by the August 18 patch:

Official sources revealed that a new patch will be coming out on August 18th. This will include the addition of the new Supporter Pokemon Blissey, and will also feature other balance changes. Given prior patch time releases, it will likely release at 12AM PDT.

A new update has been released, featuring a fix to Gengar's Hex, as it was experiencing a bug where it wouldn't do any damage. In addition, the increase/decrease of rank in the Master cup and onward after a match was reduced, as people were losing rank too easily.

The update will be automatically downloaded and you may be prompted to restart your device once it's complete.

A new update that introduces a large number of bug fixes, buffs, and nerfs is set to arrive on August 4, 2021 at 12AM PDT. Another significant addition will be the "Spectate" feature but it will initially be on a test release. The update will be automatically downloaded and you may be prompted to restart your device once it's complete to apply it.

Popular Builds Will Be Nerfed

A large part of this update are the changes in the skills and moves of a large number of Pokemon. Most of these changes are nerfs to usual builds and buffs to less popular ones. Below are the Pokemon affected by this update:

As mentioned in the update, the upcoming 8/4 patch will introduce a the Spectate Feature for a short while as a test. During this time, players can view matches of other players without needing to be in the match itself. The Spectate Feature will very likely be a permanent feature of the game once it has been thoroughly tested out.

How To Spectate Guide

Gardevoir To Be Released July 28th

Attention, Trainers! Gardevoir is arriving to the shores of Aeos Island on July 28!

Keep your eyes open for when this Ranged Attacker steps into battle this Wednesday!

It was announced that the Psychic type Gardevoir will be joining us in Pokemon Unite this July 28. Gardevoir's moves were also revealed on the Official Twitter Page. We're not entirely sure what time Gardevoir will be hitting servers on the 28th!

Blastoise, Gardevoir, & Other Pokemon Will Join The Battle

Blastoise, Gardevoir, and other Pokémon also can’t wait to join you on Aeos Island!

They won’t be battle-ready at launch, so stay tuned for more details on when they’ll arrive following the release of

It was announced that Blastoise, Gardevoir, and other Pokemon will be added in the forthcoming updates. Although official sources did not mention who will be added afterard, we can assure that they will continuously add more Playable Pokemon, so stay tuned for updates on the Official Twitter Page!

Pokemon Unite's release date was officially revealed on July 15th: the full game will release on Switch only on Wednesday July 21st! We're not yet sure what exact time the game will go live.

Get Zeraora just for logging in before August 31!

Zeraora, a Pokemon playable in previous beta tests, was announced to be launching alongside Pokemon Unite on July 21st. However, this Pokemon can be obtained for free simply by playing the game at any point before August 31st!

The 2nd BETA release of Pokemon Unite is out, but unfortunately, it's limited to Japan Switch players only. Players with access to a Nintendo Japanese account can download the BETA from the shop.

How To Update Your Game

If The Game Cannot Be Updated

Your Switch can be restarted by following the steps above. Try to restart your game if your game is outdated and cannot update your game to its latest version.