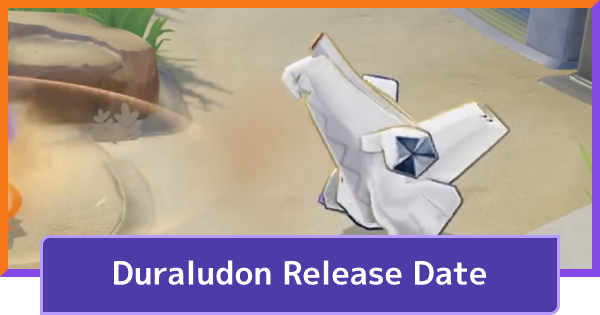 *The timing may differ based on your timezone

Duraludon's release date is March 14, 2022 and has officially come to Pokemon Unite's Battle Arena! This exciting Pokemon's arrival was announced on February 27 via Pokemon Day 2022, which makes it special in its own way given the the timing of its announcement. It's already it's making a name for itself with its mighty strength, and we're excited to utilize its cool new moves for us to enjoy the game even more!

Duraludon is currently priced the same as the more recently released Pokemon Hoopa and Aegislash.

No Confirmed Special Event For Duraludon Yet

It is uncertain whether Duraludon will have a similar event like Hoopa's Special Event, where you'll be able to receive its Unite License for free if you complete objectives for a limited time. Event or not, you can still get Duraludon's Unite License in the Battle Committee.

Duraludon's Role Is An Attacker

Teased before in a tweet, Duraludon is now officially announced as Pokemon UNITE's newest Attacker coming this March 14, 2022!

Based on Duraludon's moves featured on the official gameplay video, Duraludon has a high chance to be a Special Attacker. Duraludon may deal damage depending on their Special Attack stat, while the damage of their Moves is determined by the Special Defense stat of the opponent. It is important to consider your Pokemon's attack type when equipping them with Held Items to guarantee their maximum performance in the Battle Arena.

If Duraludon is released as a Special Attacker, we recommend equipping these Held Items to improve your Battle Arena performance when playing Duraludon.

Top and Bottom are the best lanes to tackle for Attackers. This way you'll be able to maximize Duradulon's full potential in battle at the same time you can use its firepower to actively push lanes to win the game. The faster you'll be able to destroy enemy goal zones, the higher the your team score gets.

Based on the moves seen in the brief official video, Duraludon appears to be best partnered with these Pokemon, since their moves complement each other.

Tips When Allied With Duraludon

Some tips when allied with Duradulon include the following:
1) Using Crowd Controls to paralyze opponents so Duraludon can easily explode them.
2) Extending Duraludon's battle time by providing heals and buffs in team fights.
3) Using moves like Slowbro's Amnesia to hold down enemies, especially mobile Pokemon like Greedent that can move while attacking so Duraludon can hit them more easily.

How To Play Against Duraludon

You can counter attack Duraludon by doing the following moves:
1) Using Hoopa's Ring Unbound to teleport allies to its location for back up while also dealing damage during its buffed form.
2) Taking advantage of Lucario's unmatched speed and Aegislash's burst damage might be able to take down Duraludon in seconds.
3) Isolating Duraludon from its allies in team battles using Mamoswine's skill to make it easier to take down.

Target Weak Pokemon In The Crowd

The easiest way to guarantee a knockout is to target the easiest Pokemon to defeat in group battles. Supporters are quite squishy especially in the early stages, you can burst them down when you see them going solo in the lane. You can also use Duraludon's ranged moves to your advantage by Kiting melee Pokemon like Machamp. Some Pokemon like Trevenant relies on skill shots to inflict damage to opponents which you can easily dodge as some of their moves also has a short duration before they take effect.

Duraludon does not need to evolve and has an alter form called Gigantamax which transforms Duraludon into a towering Skyscaper. It has ranged moves that enables it to fight enemies on a safe distance while it also has a wide area of effect that can damage multiple enemies at once, you'll find this useful during team battles where both team gather for objectives.

To get additional damage or speed, Duraludon needs to compensate in other areas by sacrificing some of its stats to convert. Its weak against Status Effects and hindrances that makes it lose it momentum in battle. You can also notice that Duraludon need to stay still while using the two moves featured on its release video. This might pose some difficulty when chasing or escaping enemies as its moves may be cancelled accidentally.

Here's a glimpse on how Duraludon's score points in the goal zone. Duraludon seems to shoot points straight ahead the goal zone rather than just dunking it.

It looks like the newest Pokemon Duraludon is a ranged attacker given how it's able to hurl rocky formations at its target from a safe distance. This could be bad news for many Melee-type Pokemon as it could easily target them without getting too close!

With this powerful looking move, it could be very well possible that Duraludon can inflict damage in a very wide area of effect! Enemies better watch out as this menacing purple ring looks like it could potentially hit other Pokemon real hard!

From the looks of this move, it seems that Duraludon has an attack that surrounds its opponent with debris which could potentially add to the damage that it inflicts. There's also a chance that the debris may damage the surrounding Pokemon in the AoE.

We see that one of Duraludon's moves surrounds its enemy with purple orbs - indicating that there could possibly some special effect to this particular move. Could it be a debuff? Or could it be an indication of Duraludon getting a buff out of those orbs?

The UNITE team has thrown some information on new maneuvers we could see in the Battle Arena in the most recent official video gameplay of Duraludon on Twitter. Duraludon's laser strike, for example, inflicts damage to Pikachu. We also observe that an orange AoE is in effect during this move, however we're not sure if it's accompanied by any unique buffs.

May Need To Practice Your Skill Shots

Duraludon can call forth a twisting energy that blasts off afterwards, dealing damage to anyone caught on its AoE. You'll find this useful in team battles where crowds gather.

Can Use Rocks To Block

Duraludon may be getting its secret power called Stalwart, which can negate the effects of its opponent's Abilities based on its prior appearances in earlier titles. Aside from this, its likely that its passives may include its ability to change from Light to Heavy Metal. It has the potential to raise and reduce its weight in order to gain speed or damage, which is comparable to Crustle's powers when it is utilizing Shell Smash.

Duradulon's Unite Move is still quite a mystery however it might be tied to its Gigantamax Form, which could be somewhat similar to how Hoopa's Unbound Ring works. We're quite thrilled to see what this has in store for us, so stay tuned for updates here!

May Be Another AoE Instead

In the last minutes of the video, we witness Duraludon blast off its opponent Pikachu with an intense blazing attack before exploding, unleashing waves of fire in its AoE. Though it hasn't been officially confirmed, this may be Duraludon's Unite Move. So there's a 50/50 chance we won't see Duraludon in its Gigantamax form, but this move can definitely inflict damage on nearby opponents!

What Kind Of Pokemon Is Duraludon?

Duraludon is a Steel Dragon-type Pokemon know to have a body resembling polished metal. It's said to be quite strong despite being lightweight. Its stats from previous games in the series show us that it's quite fast and also has high defense and attack.

Duraludon does not evolve, and with that said, we can expect it to be a great performer at any stage of the game in Pokemon Unite.

Even though it does not evolve, Duraludon is known to change its form into Gigantamax which enables its size to grow to the point that it becomes a gigantic building-like structure towering above everyone else.

Based On The Shard

It is said that Duraludon's Gigantamax form is inspired from the tallest building in United Kingdom due to its unlikely resemblance with it.

Only Pokemon That Uses G-Max Depletion

Duraludon is known to be the only Pokemon that can use an exclusive G-Max Move called G-Max Depletion. Gmax Moves can't be used by normal Pokemon that's why it makes them unique and rare.

Duraludon has been fighting for its territory against its nemesis, Tyranitar, in the Galar mountain range. There's no announcement yet if Tyranitar will join the Pokemon Unite roster as well although the idea of it makes it exciting.

Duralumin is a strong, hard, lightweight alloy of aluminum, its description can be said the same for Duraludon. Its also a trade name for one of the first age-hardenable aluminum alloys. Its possible that Duraludon's name came to be by combining it with the Ancient Greek word -don, a common suffix in dinosaur names derived from.

No Confirmed Duraludon Skins Yet

There has been no formal confirmation that Duradulon's release would include a new Holowear skin. We will keep you updated when new information becomes available.

Duraludon has a similar color scheme and gait to Absol. With that said, we think any of Absol's current skins like the Fashionable Style, Dark Suit Style, and Sweet Style would look great on Duraludon!