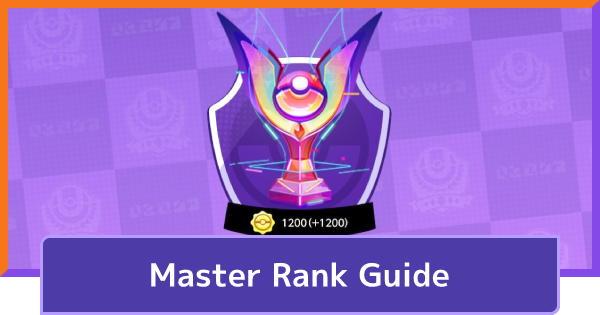 This article was written on August 8. Information written may or may not apply based on the current meta and in-game updates!

This guide shows how to rank up from Master Rank in Pokemon Unite (Pokemon MOBA). This includes what to do before and during a match, what to avoid, what to prepare & more!

About This Master Rank Guide

How The Writer Reached Master Rank

This article is about the writer's experience and methods in reaching the Master Rank. It covers several topics such as used Pokemon and some tactics employed to reach the highest rank. Even if you're not yet in Master Rank, you can definitely find something useful in this guide.

As this is a guide written mostly around the personal experience of the writer that has reached Master Rank, some tips may not be applicable to you. If you want to raise your rank or increase your win rate, you can use of most the recommendations written here.

Made By A Jungler, For Junglers

The writer of this guide reached Master Rank by assuming the Jungler role for most of the ranked Battles. It greatly helps if you are familiar with the role and how it plays during matches.

Now that you've made it to Master Rank, the fight isn't over, you still need to make it to the top 100. Luckily, we've put together a list of the Pokemon most used by the top 100 players in the game. If you want to see what you're likely to be up against, or read a more detailed analysis of the meta, check out the article below.

Top Plays Of The Week

Of course, proper strategy is needed to win the match, and there are players that pulled off some of the outstanding plays that can be used as a guide to your next match. Check out the link below for the top plays for this week.

Top Plays Of The Week

As Junglers can easily initiate attacks and ambushes, a Jungler that can easily clear Wild Pokemon has the advantage. Zeraora has that high-mobility and clearing speed, making it a highly recommended Jungler Pokemon.

Get It For Free

You can have Zeraora for free if you played the game during its first few weeks. If you were able to get Zeraora early and familiarize yourself with it, you can quickly adapt to how it plays in Master Rank.

Lucario's innate high resistance, high offensive power, and exceptional melee is a boon in higher ranked matches. It can also effectively fulfill the role of a Jungler, so having it as an early purchase is highly recommended.

Charizard is the writer's favorite Pokemon so it has seen good use during the Master Rank run. It also helps that it was chosen as the initial Pokemon, giving the writer more time to use it. It wasn't chosen because of its great skills, but more so because the writer simply likes Charizard.

The writer was able to reach the Master Rank using 2 key Held Items: Muscle Band and Focus Band. Concentrate on upgrading both using Item Enhancers and leave the other Held Items for later. For the 3rd Slot, you can equip a Buddy Barrier or Assault Vest for additional defense.

Greatly increases the offensive capabilities of your Pokemon as it directly affects damage and attack speed. Highly recommended to upgrade first. Investing upgrades on the Muscle Band can also benefit your other Pokemon. It can easily be used on most Speedsters and Attackers.

Muscle Band - How To Get & Stats

As a Jungler, you'll mostly find yourself getting close and personal to effectively dish out damage. This item helps you increase your Defense while also granting you a bit of recovery for the next attack.

Focus Band - How To Get & Stats

Key Points To Remember For Jungler

In this part, we discuss tips and info that helped the writer reach the Master Rank as a solo Jungler. Below are some pointers that can be used to help you increase your rank and to familiarize yourself with the mindset of a roaming Jungler.

How To Contest The Enemy Team's Jungle

Take great care during the opening minutes of a match. If the enemy team's Jungler is a Gengar, be aggressive and prevent it from leveling up.

Make sure to look at your opponent's lineup and check if you can play aggressively or defensively. Be proactive and always look at the enemy's lineup to plan your jungle route.

Always push for the advantage and try to pressure the lanes whenever you can. Pokemon Unite is a game that favors numbers. As a Jungler, go and assist the top and bottom lanes. The extra body may be advantageous enough to tip the balance to your team!

Target the lowest level Pokemon or the one with the lowest HP to easily remove a member in the opposing team. Also, once you are able to push the enemy team, you can get a larger difference by taking their undefended Wild Pokemon for XP!

Lane Guide - Which Lane Should You Go?

The writer recommends prioritizing Drednaw over Rotom once they spawn. However, if you find it difficult to get Drednaw due to enemy pressure, go to the top lane as fast as you can instead and farm Wild Pokemon.

The team that defeats Drednaw gains EXP for the whole team, increasing the team's overall level and granting each of them shields which can be a huge advantage. If you find yourself losing Drednaw to the other team, be proactive and farm Wild Pokemon to compensate for the difference.

Playing solo can be disadvantageous as you have to be concerned with how to communicate with your team. While you can try Voice Chat, you can also make use of the Quick Chat Wheel for easy call-outs and warnings. Do this to inform teammates of enemy positions or possible weak spots that you can take advantage of.

For example, if your team plans on taking down Zapdos or ambushing the enemy team, you can easily voice it out using the chat wheel. Communicate so you can secure Zapdos and win the match.

If you think your team can manage to defeat or defend Zapdos without you, you can sneak to the enemy team's goals to score. If you are carrying 50 points, this is highly recommended as that can sway the balance of the match during the final stretch.

Do Not Blindly Attack Zapdos

While defeating Zapdos can be advantageous, you also have to consider that the enemy team can still win the fight. Weigh possible options and take note of enemy numbers and level differences. They may also take the time to sneak and score goals while you contest Zapdos!

The Jungler or middle laner is expected to have the highest level in the team. With that said, Junglers can dictate the flow of the battle if they pressure a lane.

"When should I go to a lane?" or "what should I do to level up more?" are questions that can greatly affect the flow of the fight. If you have the confidence and the aggressiveness to carry your team, try using a Jungler.

While downing Drednaw is important, not getting KO'd by the enemy team is more important. Getting downed grants the enemy team much needed EXP and also temporarily prevents you from leveling up. As Drednaw's spawn place is a likely battle spot, carefully think if you and your teammates can survive a clash so as not to make a wrong move that can increase the enemy's advantage.

Fights Can Be Dragging

Pressure Goals Or Get XP Instead

If you think that your team may take a long time to down Drednaw, consider pressuring the goals or getting EXP from Wild Pokemon instead. Know how to economize your time and get as much advantage as you can during the match.

Don't Give Up On Zapdos

Even with a 200~300 point lead, there are times that the team that manages to defeat Zapdos can turn the battle around. If you find yourself losing, try tactics like hiding in bushes while having the enemy team whittle Zapdos' HP down, then swooping in for the last hit. Note that the enemy team can also do this.

Should Zapdos fall, while it greatly increases the chances of winning, it doesn't necessarily mean the end of the match. Continue to fight on and find weaknesses in the enemy team that you can exploit.

Other Things To Consider

As with ranked matches, you are often times matched with players of the same skill level so do not despair if you have a 50% win rate as it is very normal.

The writer of this guide has also experienced straight losses and demotions. It is pretty normal and even high ranking players and streamers have experienced losing streaks.

What To Do When You're Losing Guide

If you experience those long discouraging stretches, instead of quitting reflect on your mistakes and strong points so you can gradually improve your way to Master Rank.