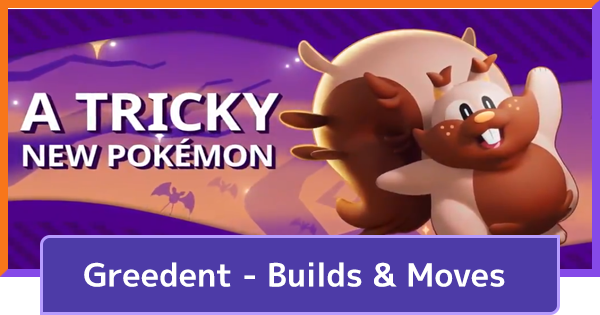 Greedent received a minor nerf on the December 9th Patch where Covet's cooldown increased & the duration of move decreased. Although the changes may affect the Covet users in-game, we reckon Greedent can still fight well in matches!

Greedent received a major update on the November 10th Patch that decreased its moves' effect significantly. Although having major nerfs, using Greedent is still effective as a Defender-Type Pokemon.

This build gives you the whole package of damage, HP recovery, shield, buffs, and enemy debuffs - making you quite the tank indeed! You won't need to worry too much about your HP levels running too low thanks to Stuff Cheeks as it either recovers your HP or gives you a shield if your HP is already maxed out. Head to the frontlines to cover your allies, hit enemies in range with Belch to damage them and slow them down, and then quickly use Stuff Cheeks when your HP runs low. You'll notice that this combo makes you quite the hard nut to crack! Work together with another ally as you defend and attack, and you'll get yourself some really quick enemy KO's.

Using these two moves together has a synergistic effect: Covet has you run into enemies to damage them while dropping Berries, and Bullet Seed deals more damage the more Berries there are - making your attacks stronger as both moves progress. In addition, Covet lets you use Bullet Seed as you run around knocking enemies, which means you can double the damage you deal as you use both moves at once. With the shoving effect of Covet and the slowing effect of Bullet Speed, this build has the potential for crowd control and preventing enemies from reaching their objectives.

This build runs Greedent in the jungle, and has one main purpose in mind: reaching level 7 as quickly as possible. At this point you'll get access to Belch, which will dramatically increase your damage potential.

Use Belch After Your Unite Move

The most powerful combo Greedent has at its disposal is spamming Belch during its Unite Move! For 9 seconds after using your Unite Move, your other moves will have no cooldown! This will let you deal massive damage with Belch spam.

Increase Greedent's movement in battle while also recovering any lost HP with berries using Stuff Cheeks. A shield will take effect when Greedent reaches its max HP, thus increasing your survivability in the Battle Arena.

Greedent can attack while moving with Bullet Seed. The more berries you have stashed away, the more damage this move deals. Targets hit gets their movement speed decreased, preventing them from getting away quickly. So use this to your advantage by moving around while spitting seeds at them, making it easier to knock down targets.

This section has basic tips and tricks that you must know to effectively control Greedent. Treat this as a supplement to the Beginner's Guide.

This section is for those looking to up their play with Greedent. Treat this as a supplement to the Advanced Players Guide.

Although Defense Curl is a good defensive move, we recommend that you prioritize going offensive with Tackle first so you can KO Wild Pokemon quickly - a very important thing to consider at the earlier stages of the game. Aside from this, it also can deal damage to several Pokemon at once, so utilize this when targeting Pokemon that are lined up.

Low Attack At The Outset - Stick With Friends

You shouldn't struggle taking out Pokemon from Mid to Late Game, but you will find that your attacks are on the weaker side at the start. Avoid straight 1 on 1 fights with Pokemon & stick with your teammates so they can deal with the attacks while you defend them.

As a Defender, you'll be one of the primary goalkeepers of your team. Defense Curl makes this task even easier for you as you're granted a shield with this move and also drops a berry which you may consume later for HP recovery. Don't be afraid to chase enemies away by attacking them with Tackle while you defend.

Once you evolve to Greedent, you'll get two interesting move choices: either Stuff Cheeks or Covet. While both increase your speed, the former either recover your HP or gives you a shield if your HP is maxed out, while the latter deals damage and throws enemies. Your choice will shape the kind of role you'll be playing from here on out, so choose based on whether you want to go defensive be a tough nut to crack with Stuff Cheeks, or if you'd rather do more crowd control with Covet.

At level 7 you'll get a choice between two offensive moves: Bullet Seed and Belch. Bullet Seed deals more damage the more Berries you have and decreases the speed of your enemies. Note that you'll have to keep hitting the R button to deal the next successive shots. Belch deals damage in one go and slows down opponents with the added bonus of a quicker cooldown the more Berries you have. Both are great options, so choose based on your attack style and preferences.

Both of your level 7 options will in some way be affected by the number of Berries you have stocked up. You'll want to make sure you're managing them carefully to maximize Bullet Seed's damage and Belch's cooldown reduction!

Start with Belch to deal damage to the enemies in front of you and to slow their movement speed down. Follow up with Stuff Cheeks to restore the HP that you might have lost, get a shield if your HP gets maxed out, and increase your speed - which could come in handy in escaping if you find yourself in a pinch!

These two moves work great together as Covet has you run into enemies to damage them while dropping Berries, and Bullet Seed deals more damage the more Berries there are - making your attacks stronger as both moves progress. Start the combo with Covet and guide your movements to keep hitting enemies around you, then quickly follow up with several Bullet Seed shots while running around with Covet to double the damage you deal.

Bullet Seed & Covet can be a great combo as you can chase your opponents with Covet & run them over to stun your enemies for a while. Follow this quickly with Belch to deal more damage while slowing them down - which can help both you and your teammates in a teamfight.

Guide Greedent into the battlefield armed with Bullet Seed and Stuff Cheeks! Barrage enemies with Bullet Seeds to pressure their HP. They won't be able to getaway since Greedent can use this attack move while moving, not to mention that it slows down any Pokemon that's been hit by this move. You can use Stuff Cheeks after to regain any lost HP during the encounter and also speed up Greedent, in case you feel you need more mobility to catch up with your target's momentum.

Greedent's Unite Move, Berry Belly Flop is a great move to utilize in a pinch as it restores HP and lets you deal damage to a large area - damaging and throwing potentially several enemies at once. After that, the cooldown of all your moves is reset - giving you an advantage over your foes. This ult can easily turn the tables in a heated battle, so use it wisely!

This section will teach you which specific Wild Pokemon to take out in what order, as well as exactly what to do at various stages of the game. Note that this is intended specifically for a Mid lane Greedent build!

If the middle lane is a desert, the locations of ③ and ④ are switched.

When going middle, you'll want to get Tackle first so you can jump over the wall to reach Lillipup. You can also use Fluffy Tail to help take out Ludicolo, thereby increasing your clear speed.

If the middle lane is a desert, the locations of ③ and ④ are switched.

When fighting over Combee & Vespiquen, try to distract your opponents by attacking them. However, since you still won't have Belch yet, don't try to chase them.

Greedent's Belch is strong & has no cooldown when used after its Unite Move. This is excellent in teamfights, and especially a game-changer vs Zapdos and Drednaw. Do your best try to level up as soon as possible to obtain the Unite Move.

7:00 After First Drednaw Fight (Before the Final Stretch)

Greedent's Unite Move has a cooldown of 105 seconds - you'll want to have this up at every major objective, such as Rotom or Drednaw. Once you use this move, your goal will be to charge it up as fast as possible before the next big objective teamfight. Do this by defeating Wild Pokemon!

Try to check the map first before capturing Zapdos to see if opponents are gathering in the center. Try to capture Zapdos faster by Using Unite Move + Belch repeatedly if there's no opponents present in the central area yet. If the enemy has already assembled, however, you should of course prioritize the teamfight.

Pokemon Greedent Is Weak Against

How To Play Against Greedent

Pokemon Greedent Is Strong Against

Tips When Allied With Greedent