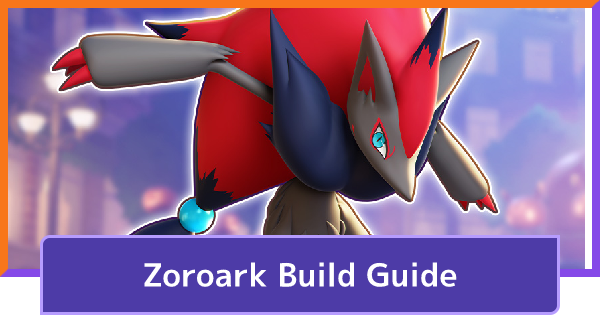 Trick Or Treat Your Enemies With Zoroark This Halloween! (New!)

The hauntings has begun as Zoroark creeps from the shadows into the Unite Arena dressed in its fancy Costume Party Style holowear, just in time for Halloween! Check out our guides below to learn more about Zoroark's powers to scare your opponents this spooky season.

When using Zoroark , you should prioritize activating +4% attack with 6 types of brown support medals. It is recommended to use the remaining 4 slots with white support medals to increase attack.

Choose Slash as your Level 1 skill. Choosing Fury Swipes gives Zeraora some considerable range but no certain method to deliver damage. Slash may be used more frequent with its low cooldown rate to farm in the early stages and to take down Wild Pokemon.

Try To Roam The Other Jungle Side Of The Enemy Team

When you've reached level 5 and upgraded your move, you can try to use Illusion to sneak past the opposing team's side of the middle lane and defeat the wild Pokemon spawning in the area to steal their EXP resources or special buffs at the same time increasing Zoroa's level.

Use Obstacles To Escape Pursuers

Because most of Zoroark's moves are dash moves, you can easily jump over obstacles. It will be easier to leave and escape if you are able to use your environment, particularly barriers, to your advantage.

You'll notice that Zoroark's significantly gets stronger when it reaches its power spike at levels 5, 7, and 9. You'll only need to evolve once to become Zoroark, so to take advantage of it is quite crucial to prioritize getting EXP. Make sure you're ready to clear the jungle as soon as the wild Pokemon respawns!

Level 7 introduces a new move choice in the shape of Shadow Claw or Cut, which increases your damage significantly. You should prioritize gaining experience here and don't waste too much time pushing lanes when you are under leveled against your lane opponent. Help your teammates if they are in trouble, but don't be too much aggressive in pushing to the point of overextending.

While leveling, aim for isolated opponents to KO. To level up, regularly KO wild Pokemon in the middle area. To gank, look for sole or fleeing opponents with low HP. By doing this consistently, you should be at level 9 by the time you face Zapdos.

Remember those dash abilities, such as Feint Attack, Night Slash, Night Slash and Cut, can be used not only to jump to enemies, but to run away from them.

Use Your Unite Move Aggressively

Nightfall Daze allows the user to send out three dark shock waves, each with a larger area of impact and doing damage to opponent Pokemon. While emitting shock waves, the user is immune to impediments. Pretty straightforward and easy to use as there is no charging time to execute it. Extremely useful when used during clashes or when targeting high-priority Pokemon like Attackers and Supports. Use it when the opponent team is gathered in one location since it may inflict multiple enemies at once. Winning the final team fight is critical since your team may be able to secure Zapdos.

Take Out Supporters Near Zapdos

In the late game, you'll nearly always face off against the opposing team at Zapdos. It's tempting to go head-to-head with Zapdos, but this is better left to your larger All-Rounder and Defender friends. Instead, circle the perimeter and wait for the enemy Supporter or any other squishy Pokemon to arrive. Then, using your dash attacks, leap in and eliminate them.

Pokemon Zoroark Is Weak Against

Pokemon Zoroark Is Strong Against