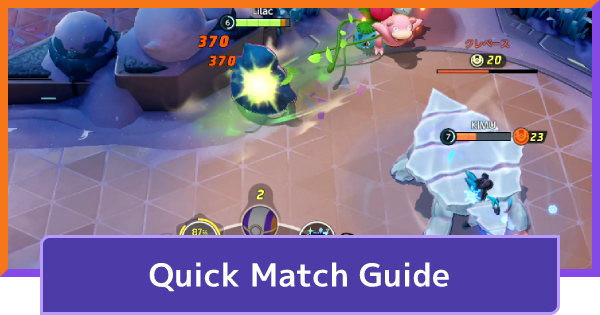 In Catch ’Em battles, some wild Pokemon will be catchable in Mer Stadium. When you catch one of these wild Pokemon, a symbol depicting that Pokemon will replace your battle item icon. You'll only have a limited amount of time to activate this symbol, but once you do, you'll be able to play as that wild Pokemon.

Wild Pokemon That Can Be Played Are Highlighted

Keep an eye out for Wild Pokemon with a white aura as these can be caught and played with. This sphere distinguishes them from the other normal, un-playable Wild Pokemon encountered in the arena.

You'll be able to encounter Boss Pokemon during the game. These are much stronger and has a higher damage output than typical Wild Pokemon. Use them to get an advantage over the opposing side!

Some Boss Pokemon moves may render the goal zone defenseless for a limited time when used while inside an opposing goal zone. This allows you and your squad to successfully push lanes. Furthermore, rendering goals unprotected disables whatever healing that goal zone may have till the charge runs out!

A new quick battle mode was announced this Sunday (Feb 27th) entitled Full-Fury Battle. It will only be available through the Weekends & Monday.

The quick battle itself is similar to Mer Stadium with the same rules and mechanics but with an added twist for your team to get the highest score possible.

Use Rotom To Your Advantage

To earn more points, attack Rotom in the center regardless of whether you're on the top, bottom, or center lane. Capturing Rotom can get you to score a Goal without interference and thus help you break your opponent's Goal Zone.

There are also rewards for completing tasks for this event so make sure not to miss it.

There are no special rules set in place for Mer Stadium. It will play out just like a regular Quick Battle match.

Unite Battle That Can Be Played Quickly

As it says in the name, Quick Battle is a game mode in Pokemon Unite where the matches end fairly quickly. Instead of the regular 10 minute games, Quick Battle matches only last for 5 minutes.

Another change is the amount of players. In Quick Battle, you can play in either 4v4s or 3v3s depending on the map available that day.

There are 3 Quick Battle maps that rotate every day: Mer Stadium, Shivre City, and Auroma Park. Each should have their own unique feature, from graphics to the Wild Pokemon you can find there.

There are currently Challenge Missions that can only be done in Quick Battles. The type of challenge will differ depending on the map.

Quick Battle can be played along with friends or other random players. Players can also choose to play against Bots if they want to in this game mode.

How To Play CPU Match

The first thing to do as with any other match is to select the Pokemon that you want to use in battle. Choose between Pokemon you have unlocked or the week's free Pokemon.

Can't Have 2 Of The Same Pokemon In A Team

A team can only have 1 of each Pokemon in a team. Use chat to communicate with your team, whether it's with roles or which Pokemon to use.

Remember to choose the Battle Item & Held Items for your Pokemon before starting the match. You can do this by tapping "Battle Preparation". These items are essential to get the most out of your Pokemon.

3. Start Of The Battle

After each team member is ready, the match will begin automatically. You can see the Pokemon of both your team and enemy team in the loading screen.

1. Divide Team Members Into Each Route

At the start of the battle, each team member should proceed to their specific lanes and defeat Wild Pokemon they can encounter.

Once you've leveled up for a bit, head to one of the goals and score with the points you've collected. If an enemy is near the goal, either push them back with another teammate or wait for them to leave.

Scoring Guide & How To Score Points

Time to fight the enemy Pokemon head on. If you can KO your enemy Pokemon, you will both get EXP points and the Aeos Energy that Pokemon held. If you're KO'd, you will respawn later in your base.

Enemy Aeos Points Need To Be Picked Up

When you KO an enemy, their Aeos Points will fall where they were defeated. Remember to pick it up to add it to your points. It's a Yellow Ball.

Cycle between defeating Wild Pokemon and heading to Goals to score. If an opponent team heads to any of your team scores, defend it to prevent them from scoring.

Special Wild Pokemon that you can battle and defeat to get buffs will spawn on every map. They are stronger than other Wild Pokemon and will cast a special move if not captured earlier. They will also provide benefits when defeated.