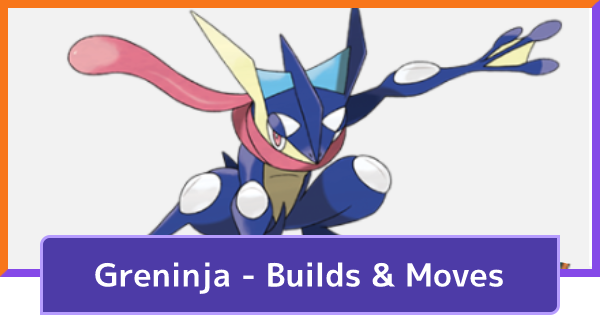 Greninja received some nerfs and bug fixes on the Dec 9th Patch, with Double Team & Water Shuriken effects decreased. There were also bug fixes with the Basic Attack and Waterburst Shuriken.

During the September 22nd Patch, Greninja received some tweaks and bug fixes. Although Greninja's ATK, HP, and Passive effects have been nerfed, Waterburst Shuriken's activation time has increased. There are also bug fixes for the Smokescreen and Water Shuriken, as well as adjustments to the Double Team clones to make them easier to attack. Overall it's likely that Greninja will take a hit, but it's unclear to what extent.

Greninja has seen some adjustments in the August 18th patch. Smokescreen has been nerfed substantially, with Water Shuriken and Double Team being buffed to compensate.

Although both abilities in this tree are worthwhile, Smokescreen can really save you in a pickle, allowing you to retreat and recall away from a battle. The disorienting effect of Double Team can be desirable, but the enemy can usually read which one is the real one quite quickly.

Greninja's Surf is a very reliable frontal charge ability that also has the benefit of healing you. It's substantially easier to land than Water Shuriken, and can also be reset if you KO an opponent. In general, this is the safer of the two moves to pick.

Look For Opportunities To Attack

Jungle Greninja makes use of the buffs and mobility to roam the map and assist lanes that are in trouble. Map awareness is key here so keep looking for opportunities and enemies that are deep inside your lane.

Try to attack from the sides or from the rear to catch enemies by surprise. The goal here is to minimize your chances of getting downed while having the best position to attack and aid your team. Use the bushes to spring ambushes or to hide your approach.

The Water Shuriken build has more sustain compared to Greninja's other builds. When a Water Shuriken lands, Greninja gains HP, granting you more survivability during fights. You can also use Water Shuriken on Wild Pokemon to get some HP while roaming.

Unfortunately, Water Shuriken is a difficult skill to land. Once aimed, Greninja fires the Shuriken at a fixed angle making it an easy skill to dodge. Make sure to target slow enemies or bound ones when using this skill.

Double Team allows Greninja to dash a good distance forward. This skill can help you quickly close a gap and is incredibly useful when defending or chasing.

Easy To Miss With Water Shuriken

To dodge a Water Shuriken, the enemy Pokemon must only move to the sides. Use this skill only if you are sure if it will land. Ask help from other players to keep enemies in place to attack them with this skill.

This section has basic tips and tricks that you must know to effectively control Greninja. Treat this as a supplement to the Beginner's Guide.

This section is for those looking to up their play with Greninja. Consider this to be a supplement to the Advanced Players Guide.

Bubble is a great support ability, especially when approaching goals for the first time. It will not only damage opposing Pokemon, but it will also slow them down. With another teammate by your side, you can finish off enemies before they can run away. Also take into account that Bubble travels down a straight line and the range is somewhat short, making it easy to dodge it.

Evolve As Quickly As Possible

Greninja has to go through two evolutions before getting its final form. Froakie is a squishy Pokemon, and Frogadier also is somewhat lacking in attack. Aim to evolve to Greninja at Lv. 7 by the 5-minute mark of the match.

Substitute Lets You Close Distance Or Get Away

Substitute can be used to close in on enemies, finish them off when they're retreating, or dash away to get out of a losing fight. You can also use this to easily reach certain spots.

Both New Attacks Are Dashes

At Level 5, you will have to choose between 2 dashes. Double Team is a support Dash since it summons clones to help you while Smokescreen is a DPS Dash since it boosts Normal Attacks after being used. Smokescreen is way better when it comes to escaping due to the added stealth while Double Team has a better dash distance. Take note of both moves' advantages and disadvantages when picking them.

▲ More damaging if you attack after using Greninja's Unite Move

Greninja can deal the greatest amount of damage with its melee attacks. Aside from the splash damage, Greninja's melee also causes it to move forward, blocking the enemy's path. Close in using your skills and smack the enemy until they fall down. Take care not to get into traps though as Greninja can be easily burst down if you're not careful.

Can Reliably Roam The Map

With its final moves unlocked, Greninja can finally freely go around the map to hit targets and assist teammates. Use the Dash skills to close gaps or escape brawls, and use either Surf or Water Shuriken to deal damage. Aiming is particularly important as not landing your moves can doom you. With a horrendously low HP, Greninja needs to be in and out of fights as fast as possible.

Start off with Smokescreen to close in on enemies and raise your Normal Attack. You can then use Surf to deal damage or finish them off. If they get KO'd, Surf will reset its cooldown, which you can then use to reposition.

Initiate the attack with either Smokescreen or Water Shuriken and finish the job using basic attacks. Both moves have great synergy with each other as Smokescreen can propel Greninja forward while Water Shuriken can attack and heal from a distance. This combo can be used even while on the run, which can turn a pursuer into a possible target.

Use Double Team to close the gap when chasing enemies. The goal here is to get close to the melee range so you can reliably keep up using the melee boosted attack. Use Water Shuriken to attack from a distance while moving to restore your health.

How To Use Waterburst Shuriken

Waterburst Shuriken is an attack that deals a large amount of damage on a specific area. Greninja teleports to the center, smashing a water shuriken to the ground. Afterwards, Greninja gets a speed buff allowing it to chase down survivors. Properly time and aim this skill to maximize the damage. Once the move lands, you can pick a direction to jump to. Remember to jump after Waterburst Shuriken lands as you might find yourself in the middle of the enemy team.

Stay Close To Your Team

▲ Notice how Greninja's HP has less bars than Eldegoss'

While Greninja's attack damage is comparatively exceptional, its HP does not increase as much as its damage potential. Stick close and roam with your team to prevent enemy ganks and burst damage.

With a large selection of Dash skills, Greninja can easily close the gap to chase down enemy Pokemon. It also helps that these skills can get you over some walls and Greninja can use ranged attacks. Make sure to use these mobility abilities frequently for map control.

This section will guide you on which specific Wild Pokemon to target in what order, and as well as exactly what to do during the remaining time of the game. Note that this information is specifically for the bottom lane!

It's recommended that you choose Bubble as your first skill as it can damage both the 3rd and 4th Aipom at the same time. Normal and Enhanced attack damage varies depending on the distance from the target. Basically, this means you should try to fight Wild Pokemon in close range whenever possible!

Greninja's durability is very low, so it is best to avoid engaging to battle with the opponent and attack from a distance. If the opponent gets close, use Substitute to keep your distance.

At level 5, Greninja learns Smokescreen which can be used as an escape plan. However, after level 5, you'll want to ensure you get to level 7 as fast as possible. To do so, consider playing a bit more aggressively.

After Defeating 1st Drednaw～End Of The Match

Greninja's unite move is a jump attack that can be aimed at a specified location. We suggest to use this move when many opponents are clumped together in a group fight against Zapdos.

Pokemon Greninja Is Weak Against

How To Play Against Greninja

Pokemon Greninja Is Strong Against

Tips When Allied With Greninja