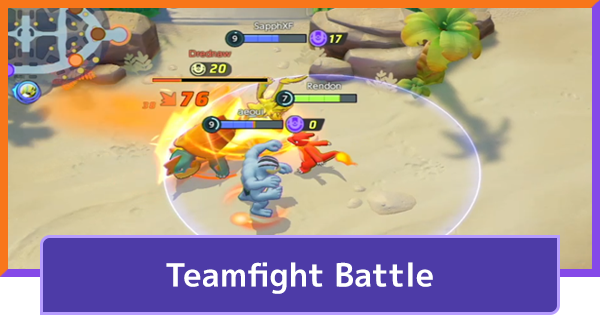 Teamfight Battle is a strategy for Pokemon Unite (Pokemon MOBA). The guide includes positions & roles of Pokemon, what you should do, 3 key points in a teamfight battle, & more.

What Is A Teamfight Battle

A Clash Of Multiple People

A Teamfight, as the name suggests, is when multiple Pokemon from both teams face off against the opposing Pokemon team. In contrast with smaller 1-2 player skirmishes, these are larger scale and will involve the whole team. In order to take down powerful wild Pokemon like Drednaw or Zapdos, you will almost inevitably be caught up in a teamfight. Knowing what to do in these situations is paramount.

Teamfights Have A Huge Impact On The Outcome Of A Match

When you win a group battle, you gain a distinct exp advantage over your foes. You'll also have an advantage in score, as your opponent will drop their held Aeos Energy. In addition, you'll have the freedom to act as you please until your opponent respawns and returns to lane. This is your chance to KO a powerful wild Pokémon or score a goal.

Focus Down The Same Pokemon

It's important for the whole team to use focused attacks on the same opponent in order to defeat them as fast as possible. This sounds obvious, but having multiple people prioritize the same person as a target will let you snowball the fight in your favor.

You should KO the opponent's Pokémon that are good at dealing damage first in order to reduce the damage your allies take. Attacker-type Pokémon are the prime candidate here, as they tend to have lower defenses. On the flip side, avoid beating away at bulky Defenders that have huge HP pools and high defenses.

Don't Move Too Far Ahead

Usually the front of a battlefield will be guarded by the opponent's Pokemon (especially their Defenders). If you step forward on your own, you may find yourself KO'd instantly, especially if you're playing a squishier Pokemon.

Stun Your Opponents So They Can't Move

Some Pokemon's abilities, like Pikachu's Thunderbolt and Snorlax's Heavy Slam, have the ability to stun opponents. If you can stun the same Pokemon with such moves, you'll have a huge advantage in the battle. Always plan ahead who you're going to target with your CC!

During a group battle, it's key to know who should be in front and who should be in the back. One misstep can lead to your death, so make sure rnot to overextend. It's ideal that Defender and All-Rounder types go in first, followed by Attackers.

All-Rounders Can Be Both Offensive & Defensive

All-Rounders are quite versatile in combat - they can provide both damage and crowd control. It's possible for them to move around with ease, and we recommend that they fight in close proximity to Defenders.

Attacker Pokemon excel at dealing damage. However, they're quite fragile. Remember, death will result in you doing zero damage, so it's important to always make sure you have ally support before recklessly plunging behind the enemy's front line.

Defender-type Pokemon have high durability and are difficult to KO. They should assertively take the lead and also act as the team's shield against the opponent's attacks. As a Defender, always consider how you can use your abilities in a way to protect your Attacker(s) from harm.

Speedsters Can Intercept An Opponent From Behind

Speedsters are good at dealing burst damage to opponents. Your primary target should always be Attackers, as they have rather low defenses. You can also use the grass to your advantage to set up your assassination. Once you've KO'ed the attacker type, make a hasty retreat to safety.

The Supporter-type has a few main roles: restoring the HP of allies, granting shields, and interfering with opponents. Everything you do should be with done with the well-being of your primary carry (Attacker) in mind!