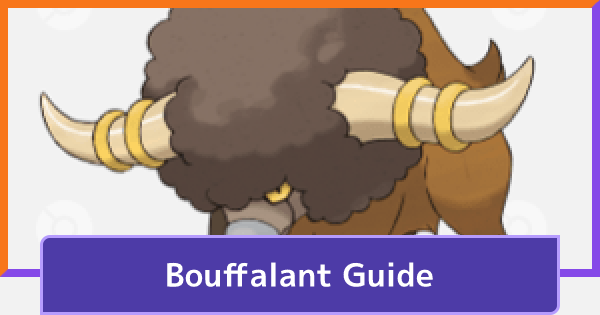 Replaced With Tauros During The Holiday Event

During the Holiday Event in Remoat Stadium (Snow & Ice), Bouffalant is replaced with Tauros for the duration of the event to match it with the theme though the same effects still apply.

Gives Buff That Slows Down Enemies Hit By Attacks

Bouffalant is a wild Pokemon that can be found in Remoat Stadium. Players that defeat a Bouffalant will have a slowing buff applied to their normal attacks, effectively slowing down enemies hit by it.

↑ Note how the auto attack of Talonflame slows down the movement speed of the enemy Greninja. This is the primary effect of the orange buff.

You will know if you've received the buff from Bouffalant when an icon appears near the bottom part of your screen. Your Pokemon will also have an orange ring around it for the duration of the buff.

Only the player that does the last hit on Bouffalant will receive the buff. Players that help in defeating it will get a bit of EXP and Points, but the buff will be exclusive to whoever did the last hit.

A Must For Junglers

It's highly important to be aware of the presence of Bouffalant on the map, as its buff can be crucial, especially for a Jungler. Grabbing this buff right before going for a gank is extremely helpful. Conversely, it will be important to note if your opponent has this buff, as that will leave you more open for ganks.

Bouffalant spawns in both Remoat Stadium & Mer Stadium Maps along with Ludicolo. These maps are used in Standard Battle Mode, Quick Battle Mode and Ranked Matches.

Located On Both Sides Of The Map

You can find Bouffalant on specific points in both sides of the map. Remoat Stadium is pretty symmetrical, allowing both teams equal opportunity to get the Jungle Buffs.

On your mini map, you can check the spawn status of Bouffalant. If present on the map, there will be a yellow dot right on its location. When defeated, the dot will disappear and will only reappear once Bouffalant has respawned.

Spawns 15 Seconds Into The Match

Ludicolo and Bouffalant will not be present immediately once the match starts. Players will have to wait 15 seconds before they will appear on the map.

Respawns 1 Minute After Being Defeated

It only takes a minute after being defeated for Bouffalant to respawn. With a relatively quick respawn rate, you can easily have the Purple Buff for most of the game by farming Bouffalant.