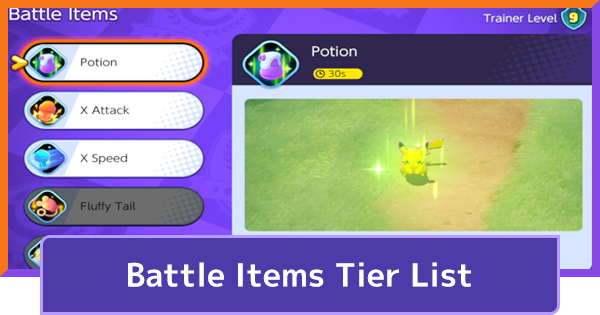 ※ Click or tap on a Battle Item to jump to details below.

This Battle Items Tier List should act as an indicator on what Battle Items are currently considered powerful. Although nearly every item has its uses in certain contexts, some are notably more versatile than others!

The Battle item so far that we've placed in the S Tier is none other than the Eject Button. Practically every Pokemon can (& should) equip this, as it provides you with a versatile movement ability. This can be used to flee from death, or to pursue opponents. The ability to jump over walls as well makes this a clear winner in most cases.

Powerful On Some Builds

Battle Items found in the A Tier are ones that can be used on certain Pokemon builds to great effect. X Attack can be useful if timed with your strongest moves in an attempt to steal a major (game-winning) objective. Goal-Getter can be good on some Speedsters in the jungle as a ways to score sneaky goals.

Battle Items that are placed in the B Tier are considered effective in limited situations. Full Heal will rely on very precise play, but can be potent if used very wisely. Fluffy Tail can be used on some Junglers to secure objectives. Slow Smoke can also be used on some Pokemon that already have a dash in order to confuse. In general, however, there are better alternatives to these three items.

The C Tier Battle Items can be useful if used in the right moment. The X-Speed can be useful for trying to make a quick getaway while the Potion can heal you when you are low on health. That being said, the precious Battle Item slot is often best used on other, more game-impacting items.