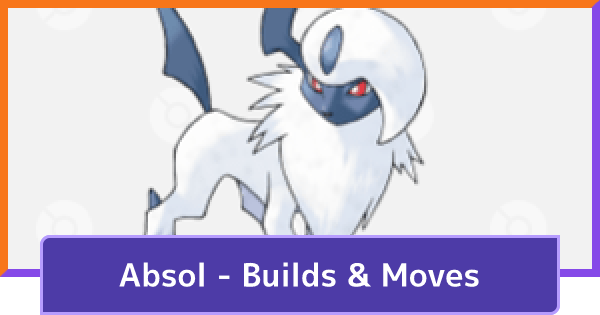 Absol has received more than its fair share of updates during the last patch. Night Slash and Sucker Punch have both received yet another substantial damage buff.

Absol has gotten its share of updates as well with changes during the past patch. Night Slash and Sucker Punch both received a substantial damage buff.

Pursuit's damage and chase potential is incredible, provided you're able to get back attacks. It's a bit of a high risk, high reward build, but it is extremely powerful. Psycho Cut will deal more damage than Sucker Punch if you factor in all 3 enhanced auto attacks. The range is useful to have too.

The movement provided by Night Slash's 2nd hit is very worthwhile. Pursuit can deal overall higher damage, but might be trickier to land against skilled opponents. The second dash component of Night Slash is also useful for escaping from dangerous situations.

Sucker Punch is a very solo-focused ability that will let you hone in on targets easily. However, it's also easy for less experienced players to misuse it and end up stranded in the enemy team. Psycho Cut is in general safer. In addition to this, if you get your 3 auto attackers, Psycho Cut also generally deals higher overall damage.

If you're looking to catch fleeing foes, Pursuit is your best bet. Striking from beind will effectively reset the cooldown, giving you massive damage. Sucker Punch will let you do this even better, as it will lock on to your target.

This section has basic tips and tricks that you must know to effectively control Absol. Treat this as a supplement to the Beginner's Guide.

This section is for those looking to up their play with Absol. This is a supplement to the Advanced Players Guide.

Although it's possible to start with both abilities, starting with Feint will let you jump over the first wall to reach Lillipup faster. Remember not to tag either of the two Aipoms, as you don't need them to reach level 5!

Start by jumping over the wall and getting the Lillipup. Once you've gotten that you should be level 2, so take on Ludicolo. This will get you to level 3. Defeat Bouffalant, then one or two of the Crawdaunts on your side.

A Note On Jungle Buffs

Once you've got your Bouffalant Buff, which slows down enemy Pokemon you hit, head over to an available lane and attempt a gank. Don't overextend or fight on top of the enemy goals unless you're sure you can get a kill!

Absol is a Pokemon that clears exceptionally well and does very high dps, but you will need to unlock the full extent of your kit first. For this reason, even in the mid-game it's recommended to spend a bit of time farming Pokemon to reach level 7. Vespiquen and Audino are a good source of exp that you should always avail yourself of.

What Move To Choose At 7?

Use Night Slash to close the distance on a foe, then follow up with Psycho Cut. At this point, you can weave in some empowered auto attacks, but make sure to use your second Night Slash charge before it expires. You can use this to finish off a foe or to run away if necessary.

Close the gap on an enemy with Pursuit and follow up with a powerful auto-attack. Save Sucker Punch for when the enemy is about to flee to gain ground on them and take them out. This works splendidly on fleeing enemies, as you'll always get a back attack with Pursuit and reduce its cooldown!

Aim For Isolated Opponent's to KO While Leveling

KO wild Pokemon consistently around the central area to raise your level. Watch out for isolated or escaping opponents with low HP to gank. Ideally, by repeatedly doing this, you should reach level 9 by the time you fight against Zapdos.

Save Up Your Ult For Zapdos

Absol's Unite Move Midnight Slash deals absolutely devastating AoE damage. This is often extremely useful when fighting off against Zapdos, as the tight quarters in which you're forced to fight are a perfect fit for Absol. Wait until you see the enemy team engage Zapdos and then fire off your ult. Pair it with X-Attack if you're running that.

Remember those dash abilities, such as Feint, Night Slash, and Pursuit, can be used not only to jump to enemies, but to run away from them. Depending on your settings, your cursor will likely hover over an enemy first, so you'll have to manually adjust it in the other direction.

For Absol to be effective in farming the middle lane, getting Feint is recommended as you can use it to go over walls. Get it to quickly navigate the middle lane.

Night Slash deals more damage the lower the enemy's HP is, making it great when landing last hits. When going to assist the bottom lane, use Night Slash to help clear the Combees and the Vespiquen.

Although Absol is an excellent melee fighter, its defense stats are quite low. This makes it hard for it to go to the front. From a safe distance, use Psycho Cut during team fights and hit stragglers or lone Pokemon with your other moves. If your team succeeds in stopping the enemy team, proceed to defeat Drednaw to get the buffs.

Absol's Midnight Slash Unite Move is a targetable area attack. Use it when the enemy team gathers in one place as it can damage multiple enemies in one go. Winning the final team fight is crucial as it leaves Zapdos, and eventually victory, open.

Pokemon Absol Is Weak Against

How To Play Against Absol

Pokemon Absol Is Strong Against

Tips When Allied With Absol

Blue Effects Appeared Behind The Target