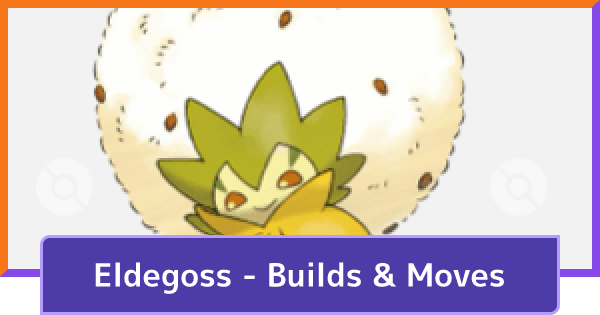 Eldegoss received some minor adjustments during the September 22nd Patch. Both of these are overall improvements to issues that the Pokemon was facing, so we can safely interpret them as being overall positives.

Eldegoss has been substantially affected by this past patch. The less often used Cotton Spore received a large buff, but its other major healing spells, Cotton Guard and Cotton Cloud Crash, both received substantial nerfs.

Eldegoss's Pollen Puff & Cotton Guard provide healing & shield buffs for allies, which can also be used to debuff enemies. This low CD combo is extremely versatile and can help you keep allies up & running in most situations.

Eldegoss's Leaf Tornado grants a speed buff to those that walk through its wake. It can be used to chase down enemies or to escape. Aim carefully when planning on using it to maximize its buffing effects

This build utilizes Cinderace's invincibility granting Feint & power-packed Pyro Ball. This synergistic combo gives you more chances to thrive in an onslaught. This is particularly great mid-game as it both deals a ranged powerful hit and also makes you invincible - ensuring your survival in case the battle gets too heated.

Eldegoss plays a vital role as the team healer with its constant tossing of Pollen Puffs. Pollen Puff effects varies differently depending on the Pokemon it attaches itself, Allies receive heals while it deals damage to enemies.

While this move is active, spores gather around the Eldegoss, enhancing its movement speed. After a short time, the spores burst, doing damage to enemy Pokemon in the area of effect, tossing them, and temporarily slowing their movement speed. This is very effective during team battles as you can provide debuffs to multiple Pokemon while also inflicting them damage.

This section has basic tips and tricks that you must know to effectively control Eldegoss. Treat this as a supplement to the Beginner's Guide.

This section is for those looking to up their play with Eldegoss. This is a supplement to the Advanced Players Guide.

Follow your teammate & help it clear wild Pokemon in your lane. Avoid fighting Pokemon from the other team 1 on 1 until you evolve Eldegoss. Mainly use Leafage while keeping Synthesis in reserve to heal your ally. Focus on staying alive & keeping your teammates in the field.

Give Last Hits To Teammates

As a support, Eldegoss must yield the last hit to your teammates. Last hitting Wild Pokemon grants higher XP, allowing your partner to grow stronger and get better skills faster.

Leafage is an offensive skill that can be used by Gossifleur(/Eldegoss) to deal more damage. As the cooldown is at a fast 4.5 seconds, pick it first and spam Leafage to quickly take down Wild Pokemon. Do this until you get to level 4.

Choose Next Moves Based On Your Strategy

Eldegoss's Pollen Puff is extremely versatile and can both heal allies and damage enemies. If you want an extra speed boost, replace Pollen Puff with Leaf Tornado. Pollen Puff can be pretty difficult to land as mobile targets such as Attackers and Speedsters can easily evade it. On the other hand, Leaf Tornado leaves a speed buff even if you miss, making it great for mobility even when fleeing away from pursuers.

Heavily use Eldegoss's skills to distract enemy Pokemon or help clear Wild Pokemon. Continue to get EXP to level 6. At this stage your team will be in frequent contact with enemy teams, so start being more aggressive by utilizing your long attack range. Get ready to take Rotom or Drednaw based on your lane.

Be Mobile To Support Teammates

Eldegoss doesn't need to always stay in lane at this stage. Return back to base or help other lanes as the situation demands. Major battles will likely occur near Rotom or Drednaw during this phase, so be ready to change lanes to help support your teammates.

At this stage of battle, Eldegoss should be near the bulk of your team to provide assists & heals. Stay mobile and follow where your team leads to provide healing and support. While you should help your team as much as you can, be ready to pull away if they over-extend. Avoid going alone, even while defending goals. Also, if there's an opportunity, try to score goals to increase your team's points.

Begin with Cotton Guard to protect yourself and your allies from damage and restore HP. Then, follow up with Pollen Puff to restore more HP to everyone in the team and also deal damage to the opposing Pokemon. Deal a few Normal Attacks after to aid your team in dealing damage. This Eldegoss build is particularly useful in assisting your team in taking down Zapdos.

Begin with Leaf Tornado to deal a ranged attack to opposing Pokemon and increase your allies' movement speed. Then, follow up with Cotton Spore as you get closer to the battle to reduce the damage Eldegoss takes and also deal damage to the enemy Pokemon nearby once the spores burst.

Open with Leaf Tornado to increase your team's speed towards the target. Afterwards, quickly follow up with Cotton Guard for added HP and shield. This can help Eldegoss secure kills or escape with your team. Remember to carefully aim the Leaf Tornado's path to benefit your other teammates.

This Eldegoss build focuses on providing heals and damage in the battlefield. During team battles, use Pollen Puff to prevent your lane partner from getting knocked out. Follow this up with Cotton Spore to deal AoE damage and debuff the enemy team's movement speed for a short time.

Cotton Cloud Crash is Eldegoss' Unite Move. It is very versatile as you can use it to dodge enemy attacks, escape, heal teammates, and defeat enemy Pokemon. Use it well and try to land it in the middle of a brawl for maximum effect.

Positioning - Stay Behind Other Pokemon

Thanks to Eldegoss's passive ability, opponents struck by its basic attack will trigger pollen and be slowed. Given Eldegoss' ranged basic attacks, players should regularly target enemy Pokemon to aid in battle & create openings for allies to strike.

With enough firepower, Eldegoss can be shutdown in a matter of seconds

Even with shields and high levels, Eldegoss is still a squishy Pokemon. Although not as soft as Attackers, you can disappear quickly if you get piled up on. Maintain safe distance and always rely on your teammates for the attack. Eldegoss' skills have great range so there's no need to go to the front to battle.

This section will guide you on which specific Wild Pokemon to target in order, as well as what to do at various stages of the game. This guide is based on Leaf Tornado/Cotton Guard builds.

Eldegoss is a support type Pokemon, meaning leveling up is not your top priority - you'll be assisting your allies through the match instead. Try to hand over the last hit to your ally as much as possible throughout the course of the match.

It's a good idea to use Synthesis when you reach level 4. Although you are a support and should give up last hits, at least try to reach level 4 as fast as possible - this is because you will evolve into Eldegoss at this point.

Leaf Tornado is a long-distance attack in a specified direction which will also increase your allies' movement speed.. Move through the grass and try to spot opponents that might be hiding there. Cotton Guard is also effective as well since it protects not just you but allies around you as well.

Eldegoss' Unite move will make you invincible and will protect you from damage. We recommend using this move when your opponent attempt to use their Unite Move as well, effectively negating it.

Pokemon Eldegoss Is Weak Against

How To Play Against Eldegoss

Pokemon Eldegoss Is Strong Against

Tips When Allied With Eldegoss

These are the actual HP recovery rate of this move without any Held Items equipped.

These are the actual HP recovery rate of this move without any Held Items equipped.