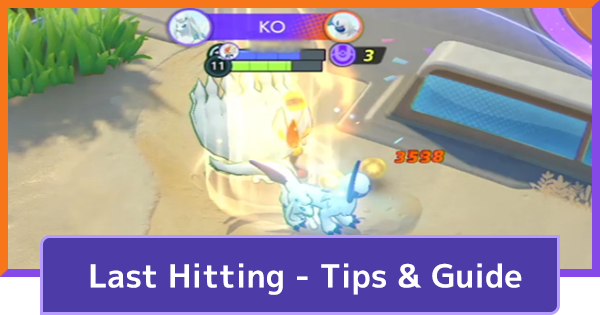 What Is Last Hitting?

The Attack Which Reduces Enemy HP to Zero

A Last Hit is defined as a finishing attack that reduces the HP of a wild or enemy Pokemon to 0. Getting the last hit can give you exp, and various buffs depending on the wild Pokemon you defeated.

The Exp. & Effects Go To The Team That Got The Last Hit

If both teams' Pokemon attack the same wild Pokemon, only the team that gets the last hit gains the exp and effects from the KO'ed Pokemon. It is absolutely crucial to deny your opponent last hits in order to get the advantage in lane.

Effects Of Taking The Last Hit

When allies KO a Wild Pokemon, you will also get a portion of that experience. During the early game for the top & bottom, it's important that the two Pokemon there maintain a balance in levels. There are exceptions if you're a support and want to feed your partner, but in general try to keep an eye out on how many last hits you're getting!

▲Absol receiving a purple aura buff after it knocks out Ludicolo

Getting the last hit on Ludicolo & Boufallant will gain a temporary ability-boosting effects. Only you will receive its effects - not the whole team. In some cases, if you KO'ed an opposing Pokemon that has said buff, you'll gain that buff instead.

Wild Pokemon That Have Buff Effects

Tips On How To Get The Last Hit From Your Opponent

Use A Move To Defeat Them Quickly

When fighting with an opponent for a wild Pokemon, try to get the last hit by using a move instead of a normal attack since they usual deal more damage. Don't randomly use your moves against enemies - save them up!

Make Use Of The Grass

When you go into the grass, your opponent can't see you even if you are near them. We recommended to hide in the grass near a wild Pokemon and aim to get the last hit after your opponent has weakened it.

Save Your Ranged Moves For The Last Hit

Venusaur's Solar Beam & Lucario's Aura Cannon can attack opponents from a distance. These moves are useful, especially when you are trying to get the last hit in a fight for Zapdos.

To prevent your opponents from getting the last hit, communicate with your allies to keep your opponent away from a wild Pokemon about to die. A great example is Snorlax's Block move which can push enemies back, allowing an ally to the last hit instead.