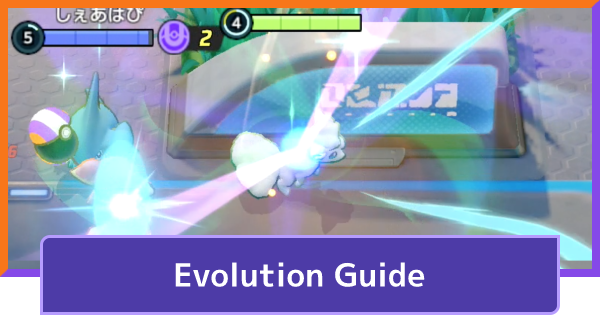 Just like in the core Pokemon games, raising up your level is the only way to evolve your Pokemon. Note that the actual level required to evolve will vary for each Pokemon.

Start At Lv 1 In Each Match

All players will be at level 1 at the start of the match. They will need to defeat both wild and enemy Pokemon to gain EXP to level up and evolve.

Earn EXP To Level Up

Learn How To Level Up Fast

Unlock New Moves Upon Leveling Up

At certain levels, Pokemon will learn new moves to replace the default ones they get at the start of the match. These moves form a different build per Pokemon, creating a unique gameplay for each of them.

Stats Increase As They Evolve

As Pokemon level up and evolve, their health and stats also increase. Since there are no items to purchase mid-match in Unite, leveling and evolving are the main ways to gain more character power!

During evolution, your Pokemon will be granted a 1-2 second immunity that will ignore any damage against them. Avoid using abilities or attacking your opponent's Pokemon when they are about to evolve! Memorizing the level that each Pokemon evolves will also help you in landing perfect timing attacks/skills against your opponents.

How To Evolve Your Pokemon

One of the fastest ways to get exp is to deal the last hit before a Pokemon is KO'd. Doing so will reward you with the most exp among all the teammates who have assisted in the battle.

You'll often find yourself aiding teammates in defeating both opponents and wild Pokemon. Note that in doing so, the experience will be partial as it was a team effort. However, as mentioned above, you'll get majority of the gain if you deal the last hit.

Dreadnaw can be a good source of EXP as it provides a chunk of it when it's defeated. We're not sure the exact amount given, but it does seem like defeating it will almost always give your team an entire level's worth of experience. This can be huge in getting your team their Unite moves before the enemy!

If you find that defeating enemy Pokemon by yourself or dealing the last hit is quite difficult, you may opt to bring Exp. Share with you in battle. Exp. Share is a Held Item that grants 2 exp every second to the Pokemon with the least exp in the team. This item is particularly useful for Supporters and Defenders.

Not All Pokemon Can Evolve

Not all Pokemon have evolutions in Pokemon Unite and will stay the way they are throughout a match. There are also Pokemon whose evolutions have been removed, like Snorlax & Pikachu.

Not all Pokemon evolve at the same level. Some may require a higher level to reach the next evolution stage. Do check each one as a Pokemon's utility and stats increase when evolving.

※ Written between the "( )" is the level required to evolve to that Pokemon. This also unlocks a new move. You can click on the Pokemon portrait for more details.

Check Out Roster Of All Playable Pokemon