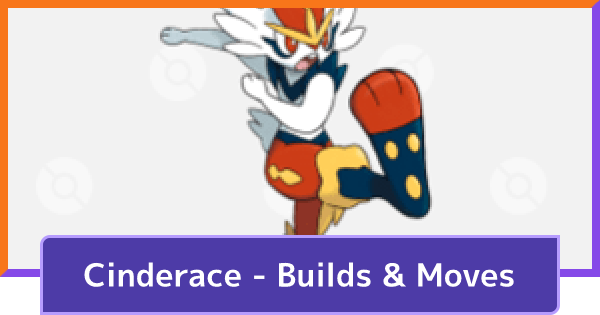 Cinderace has seen two minor bug fixes for the Sept 22 patch, which could be thought of as being an overall buff. In addition to this, two of its moves, Pyro Ball and Flame Charge, received buffs by having their damage increased and/or cooldown reduced, leading to an overall excellent patch for this 'Mon.

Cinderace has seen one minor bug fix, which could be thought of as being an overall nerf to it. However, its effect should be negligible.

Cinderace has a mix of updates as well in this past patch, which include both buffs and nerfs to its moves. Pyro Ball saw a slight damage buff, while Blaze Kick saw a damage decrease. Cinderace's overall attack was decreased, and its Feint cooldown was raised from 11s to 13s.

Blaze Kick packs quite a punch as it always lands a critical hit, shoves opponents aside, and leaves them burned. This move is particularly great for high-pressure situations or attacking from a distance because you won't need to measure your movements to make sure that your attack hits.

Invincibility moves are critical in Pokemon Unite, and Cinderace has a particularly useful one that can either aid in winning a close fight, or help in escaping one if necessary. This move also grants a speed buff, so it's great to utilize whenever you're in a pinch.

Pyro Ball is a long-range yet potent damaging shot that can damage all Pokemon in its line of trajectory. This is particularly great mid-game as it both deals a powerful hit and also gives you enough space between you and your enemies - ensuring your survival in case the battle gets too heated.

Flame Charge is a highly mobile attack as it charges you forward in a certain direction - enabling you to jump in or out of the fray depending on your needs. This gives you the option of going for X-Attack instead of Full Heal as your Battle Item so you can crank out more damage in a shorter window.

This Zeraora build ignores safety and survivability by equipping Held Items that increase Zeraora's attack. It can be pretty challenging if you're not careful as Zeraora is a melee Pokemon. But if you can get in and out of clashes fast, you'll definitely have fun with this high-power build!

As this build is incredibly fragile, look for lone Pokemon to hunt. Do not try to engage Defenders as you will surely lose due to their incredible staying power. During the latter stages of the game, go around and flank to hunt enemy Attackers to win clashes.

Don't Be Afraid To Get Close

If your opponents ever get close to you, don't fret, as your Held Items will provide you enough of a boost to counter-attack. Blaze Kick can deal critical hits while Flame Charge is a highly mobile attack which you can capitalize on.

This section has basic tips and tricks that you must know to effectively control Cinderace. Treat this as a supplement to the Beginner's Guide.

This section is for those looking to up their play with Cinderace. This is a supplement to the Advanced Players Guide.

Although Low Sweep is an equally great offensive move, Ember is the more certain choice as it deals a sure hit. Aside from this, it also triggers additional damage for the next 3 attacks you deal. You may choose to then follow up with Low Sweep which would both deal damage and slows your opponent's movements, but pay attention to your positioning!

Although you can deal with powerful hits even at the beginning of the game, you will find that your endurance is on the lower end. Avoid close fights and generally try to keep your distance as you inflict continuous damage on your opponents. Be careful when closing the distance with Low Sweep, as it can put you in a very dangerous situation.

Your initial 2 offensive moves will get upgraded to their more powerful versions once you reach level 7. Your second move will come one short level after, at 8. This is your main power spike, so you'll want to try to reach this level as fast as possible and be of use to your team.

At level 7 you'll get a choice between Pyro Ball & Blaze Kick. Blaze Kick will let you jump in onto enemies, providing Cinderace with better chase potential. Pyro Ball is a safer alternative, as it simply does damage at a long range. Consider adjusting your 2nd move depending on which one you pick here.

With this build, you'll be able to deal with a powerful close-ranged critical attack, knock back your opponent, and become invincible for a short period of time. Being invincible for both moves in this build gives you ample opportunities to deal a few more attacks without taking in damage, and eventually flee the battle if necessary.

This build maximizes damage potential by using two damage-dealing moves. Attack from afar with Pyro Ball, and quickly follow up with Flame Charge to both deal more damage and also increase the range & damage of your next basic attack. Then, deal with successive basic attacks until you eventually KO your opponent.

A build that utilizes Cinderace's invincibility granting Feint & power-packed Pyro Ball. Pick away at enemies from a safe distance with auto attacks and Pyro Ball, saving your Feint from when you anticipate a key enemy attack to land.

Dash towards your enemies with Flame Charge while dealing damage to the receiving end of this move. Follow this up with Blaze Kick to critically hit targets and shove them, leaving burn effects for a short time. Cinderace also becomes immune to hindrance while using this move, sustaining its momentum in battle.

This move can be quite useful in group battles as it inflicts damage on all enemy Pokemon in range while still keeping a safe distance between you and the opposing team.

Taking Ember is greatly recommended. Not only does it have better damage than Low Sweep, it also can inflict Burn damage over time. Also, Cinderace's passive allows it to deal more damage with a normal attack after using a move. Remember this passive as it will come in handy during the latter parts of the game.

How To Heal - HP Recovery Guide

Pyro Ball is a long-range move that can be manually aimed even without targets present. You can use this to check suspicious bushes to see if enemies are hiding inside of them. You can also use it to land last hits thanks to its almost instantaneous execution. Use this to take down high-priority targets like Drednaw for your team.

Cinderace can find itself pretty useful during fights and while farming Wild Pokemon as it has an exceptionally high offensive power. Make good use of this by invading the enemy's side of the map and taking their Wild Pokemon and Aeos Energy. Should you find yourself being pressured or ganked, use Feint to escape to a safe place.

Cinderace's Blazing Bicycle Kick has better range and damage than Pyro Ball. If you and your team lost a fight, you can still make it up by hiding inside a bush and targeting Zapdos with your Unite Move for the last hit.

Pokemon Cinderace Is Weak Against

How To Play Against Cinderace

Pokemon Cinderace Is Strong Against

Tips When Allied With Cinderace