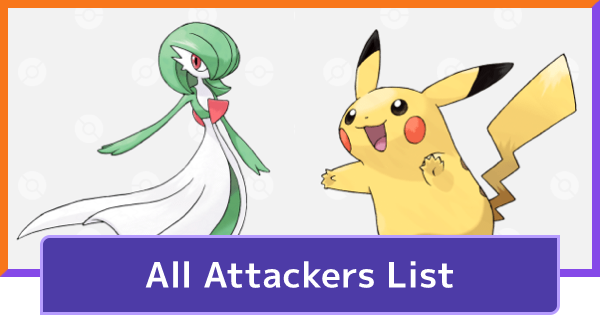 Glaceon Is Here To Freeze Enemies In Unite! (New!)

Get ready to get frozen as Glaceon ice skate its way to the Unite Battle Arena! Don't get deceived by this Fresh Snow Pokemon appearance because its more formidable than it looks like with its arsenal of ice crystals and hailstones. With its latest addition, the attacker-type roster continues to grow and will undoubtedly benefit from its Ranged-Type capabilities. Would it be able to rise above the current Meta? Check out our guides below to know more about Glaceon's icy prowess and how to use them against your foes.

These are the actual Lv15 stats for all Attacker-type Pokemon without any Held Items equipped.

Attackers need to dish out large amounts of damage against the enemy team, so they'll need to hit as hard as possible. However, there are two types of Attackers and you might get confused on which item should be equipped. So equip the ones that are appropriate to your Pokemon of choice!

Players should choose their Battle Items based on how well they can position their Pokemon. If you have superb map awareness, feel free to use X-Attack for a further boost in damage during fights. For safer alternatives, the Eject Button is very useful for getting in & out of sticky situations.

Attackers Role - Lanes & How To Play

Attackers can go top or bottom when starting, provided the lane isn't already occupied by 2 Pokemon. By default, go bottom lane so you can take out Drednaw easier. However, this decision is best made in coordination with your team.

Which Wild Pokemon To Attack On The Top Lane

If you chose the top lane we highly suggest that you target these Wild Pokemon first. The key here is to go for the Corphish and try to guarantee a list hit on that. This will put you ahead of the enemy team in experience.

Which Wild Pokemon To Attack On The Bottom Lane

If you chose the bottom lane, try to go for the Audino in the upper middle part of the lane first. This is a "shared" mob, and getting the last hit on it will put your team at an advantage.

Main Damage Dealer Of The Team

Attacker Pokemon generally have powerful offensive kits. Their normal attacks in particular are often long-ranged, allowing them to engage other Pokemon from a distance.

Can Do Burst Damage But At Long Intervals

Attacker moves can often deal quite a bit of burst damage once use but are on somewhat long cooldowns. If the target isn't taken immediately, there is a high chance that it can counter-attack, putting the attacker in danger of being KOed. It is important that the attacker has support to safeguard their retreat.

Generally, Attacker Pokemon have a lower health pool than those from other roles. This makes them quite vulnerable to being KO'd easily if they are without their supports and other team members.

How To Heal HP

Attackers' moves usually do not have prolonged crowd control effects, meaning that you will need to rely on the help of other teammates to maintain a line for you to pull back to. This also means you should use caution when going into the attack range of other Pokemon, especially defenders or all-rounders.

How To Play Attacker Pokemon

Try to pair with a Defender Pokemon when heading to the upper or lower lanes. With you two together, you can focus on attacking while the Defender Pokemon tanks the damage and create opening for the team.

When using Attacker Pokemon, it's necessary for players to consistently check their minimap. From there, you can spot your teammates' locations, enemy location when they're in your sight, and which goals are being pushed.

Do Not Engage One On One

With a lower health pool & lesser crowd control, going in solo can be risky. Only do this to Pokemon who have a lower health than yours or those singled out from their team. Do not fight when you're alone as much as possible. Enemy crowd control can make short work of you, so be aware.

Attacker Unite Moves often deal heavy damage in a line or area. Use them at the beginning of crucial fights to soften the enemy or use them mid-battle to finish off weakened foes.