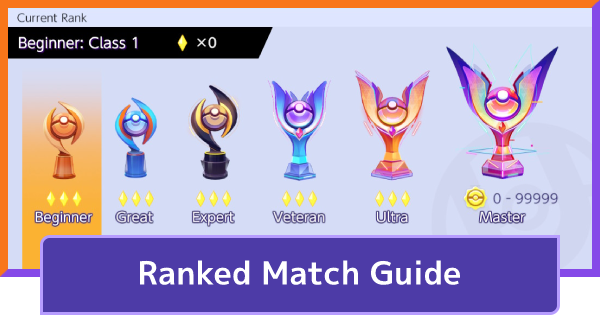 How To Unlock Ranked Matches

Players will need to reach Trainer Level 6 before they can play Ranked Matches in Pokemon Unite. This should take you about an hour's worth of gameplay, so use that opportunity to practice different Pokemon and familiarize yourself with the game before starting ranked!

How To Climb Out Of Beginner Rank

Must Have 5 Pokemon Unite Licenses

You also need to own at least 5 Pokemon Unite Licenses in order to participate in Ranked Matches. There are some Unite Licenses that can be unlocked for free while some can only be bought from the shop.

It's necessary to have a wide roster of Pokemon you're capable of playing. Being only able to play one Pokemon is detrimental as it could be picked by a teammate and you'll have no one else to play!

Ranked Matches is separated by tiers called Cups, which will be active for periods of time called Seasons. Player score & cup progression will only be counted for the duration of that season. This also means that some rewards may be season specific and will be unobtainable once the season ends.

The bread & butter of the Ranked match system is the Cup tier system. Players that win get promoted while players that lose get demoted. Players will be drawn from the same or close-tier Cups for matches, ensuring only players of a similar skill level will be drafted to fight together.

No Rank Lost In Beginner Cups

When playing in the Beginner Cup, you don't have to worry so much about losing, as it won't cause you to lose rank! Of course, this does not mean you should throw or leave, since it will still cost you Fair Play Points.

Each Cup Divided Into Different Classes

You can see the rank of your teammates on the loading screen before the match begins. Their borders will represent their ranks as the color and style change. For example, Beginner rank players will feature a bronze border, while Great rank players will have a blue color with a red design in the corner.

Thinking about getting more into ranked? You'll need to know what Pokemon are currently seeing the most play, and what the current state of the meta looks like. We've compiled a list of all the Pokemon the top 100 ranked users play, and we update it every week. In addition, we also include an analysis of current trends, to help you make more informed decisions on which Pokemon to main in ranked! Check it out below.

The Ranked Match Season 1 will be coming to an end on the 7th of November. It has also been confirmed that you'll be eligible to receive its rewards depending on which rank you've attained.

Get Aeos Tickets In Cup Rewards

At the end of each season, players who participated in Ranked Matches will receive the corresponding reward to their rank. The amount of Aeos Tickets you get will be based on the highest rank you attain in a season.

Get Outfit Rewards Too

In addition to the Aeos Ticket rewards, it's also possible to get a Work Set outfit by meeting the certain outlined conditions (play 20 games and reach the Expert rank).

Season Rewards - How To Get

Aeos Coins - How To Farm

If you performed well during in a ranked match you'll receive Performance Points as bonuses that will boost your exp for your rank. You can get points for some of the things listed below (though there are likely more we haven't seen yet):

If you earned enough Performance Points, it will actually be possible to prevent a rank decrease! Instead of going down a rank, you'll lose Performance Points - this can be a saving grace for people struggling at the bottom classes of a cup!

Keep in mind that you may lose points when you get reported for bad behavior in-game and may get banned from Ranked Match if your Fair-Play Points dip down to level 79.

Trainer Level Up - How to Get Battle Points & Rewards

Gives Aeos Energy Once You Unlock The Feature

Once you've unlocked the feature at Trainer Level 6, you'll get Aeos Energy based on your victory or loss as well. The energy can be used for a gacha that can net you additional cosmetic items or in-game currency.

Ranked Matches Required For Some Challenges

Playing & completing Ranked Matches is a requirement for some Challenges/Events that reward additional items. Even if you do not feel like going up the ranks, completing the challenges for Ranked Battles will still give you more resources to push forward.