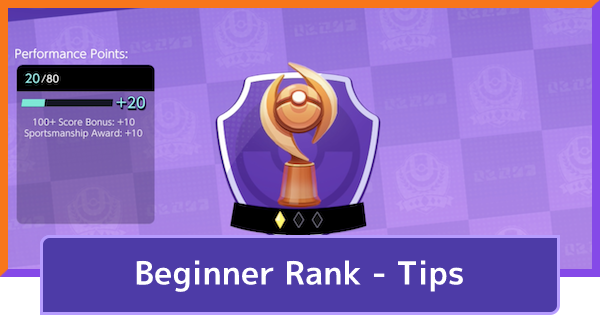 This guide shows how to climb out of Beginner Rank in Pokemon Unite (Pokemon MOBA). This includes how to unlock ranked matches, basic game knowledge, & more!

How To Climb Out Of Beginner Rank Overview

This guide summary is intended for trainers who have just unlocked the Ranked Match in Pokemon Unite and are eager to try it out. This guide will include which items you need to prepare and what to do before and during Ranked Matches!

Applicable To All Players

Although this guide is indeed intended for beginners to the game, all players will be able to find useful information to take! Even if you're a veteran, give the following content a read!

What To Do Before Unlocking Ranked Match

You can further improve your understanding of how the game works by simply completing the various tutorials. These will teach you the rules, basics, and even the advanced components of the game. They'll also net you a hefty sum of Aeos Coins which you can use to purchase Pokemon of your choice.

Beginner Guide - How To Play & Tips

During a match, you should have 2 trainers in the Top lane, 2 trainers in the Bottom, and the remaining 1 player should be in the Center (or "jungle") area. This is an optimal way of dividing the predetermined exp on the map, so you should try to follow this arrangement. You can also inform the team about which lane you are going by using the Quick Chat in the pre-game menu!

4 Things To Do During A Ranked Match

1. Stay Near The First Goal Zone

During the match, you may need to move and protect either the top, center, or bottom lane against opponents who try to score to your goal. Interrupt enemies that attempt to score on you by simply attacking them.

How To Block A Goal

If You're Not Confident, Head Top

Since the Wild Pokemon in the bottom lane give a substantially higher amount of EXP, you're likely to see a lot more action bot lane. The top lane might be a better choice for you if you're not 100% confident in what to do. However, if your team all head bottom around the 7 minute mark (for Drednaw), it's a good idea to follow them.

The center area acts like the "jungle" - there are no goals here. Players can get a huge amount of EXP and roam easily to other lanes. Speedsters work best here, though you can bring Attackers too.

You also need to defeat Wild Pokemon to raise your level. You can use your special moves on wild Pokemon to take them out faster. Make sure, however, that you're near your goal while doing this, as you may need to go and defend it from opponents!

3. Move Around If There Are No Opponents

If there are no opponents guarding the area, use this opportunity to move to your opponents' goal and do the following things:

Things To Do When Opponents Are MIA

Check The Map Before Charging In

Although there are no opponents in an area, you should not let your guard down! It's possible that they are just hiding in the grass and were waiting for you to charge in. Make sure to check your map thoroughly before moving out. If you can't see anyone on the map, refrain from going too far out.

4. Defeat Zapdos To Make A Comeback

In a losing battle, you can make a last ditch effort to get Zapdos. This may force the enemy team to respond, giving you a final chance to wipe them out, get Zapdos, and score some beefy goals. If you're already losing, go on the full offensive with your team here!

Attack Zapdos With Your Team

Zapdos has a high amount of HP and attack - it's more than capable of knocking you out if you fight it solo. We recommend defeating Zapdos as a team to be safe.

Your team's cast time when scoring goals will be instant for a limited time upon defeating Zapdos. Try to go offensive and score as many goals as possible to turn the tables or to seal your victory against your opponents.

Before preparing for the Beginner Rank, it might be a good idea to see what Pokemon the top 100 players in the game are using most! Our article below covers this, including more detailed info on what is considered the "meta". Even if you're a beginner, it's definitely worth checking out!

Held Items are power-ups that'll give your Pokemon an extra boost in stats. These stats will entirely depend on the specific item your Pokemon holds!

Best Held Items For Each Pokemon

※ You can also set your Held Items right before battle via the Pokemon Selection.

During a single match a Pokemon can be equipped with up to 3 Held Items of the player's choosing. Held Item slots are unlocked upon reaching specific Trainer Levels.

Duplicate Held Items Will Be Converted To Item Enhancers

Some Held Items like the Muscle Band can also be obtained from the Beginner Challenge. You cannot get the same Held Items again, but if you already purchased one before obtaining the reward, it will be converted to Item Enhancers, which you'll need to upgrade your Held Items.

You can equip your Battle Items during battle via Pokemon Selection Screen. You can access this by selecting Battle Prep or by pressing the ZL Button.

Received As A Trainer Level Up Reward

Battle Items can be unlocked upon increasing your Trainer Level to a specific level. In order to increase your Trainer Level, you'll need to keep playing games to earn Battle Points at the end of them. You can also check your progress by pressing the R Button when on the Home Screen.

Trainer Level Up - How to Get Battle Points & Rewards

How To Use Battle Items

You can use your Battle Item by simply selecting the Battle Item Button or by pressing the Y Button. Also, take note that Battle Items have specific cooldowns, so try to use them only when necessary.