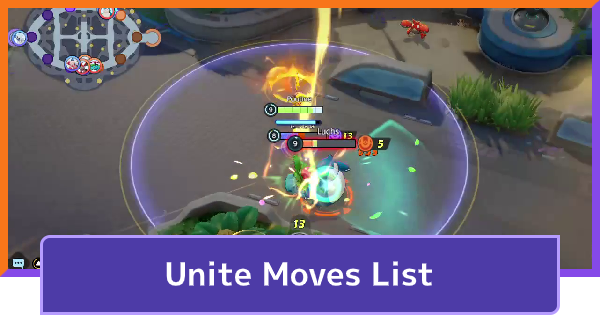 Guide on Unite Moves in Pokemon Unite (Pokemon MOBA), the new MOBA style team-battle Pokemon game. Learn their effects, how to use, cooldowns, list of all Unite moves, & more!

What Are Unite Moves

Special Finishing Moves Each Pokemon Has

Once a Pokemon reaches a certain level, they learn a finishing move called a Unite Move. Each Pokemon has a different Unite Move which they can use to deal heavy damage to opponents, potentially changing the flow of the match!

Some Unite Moves Have Multiple Hits

There are other Pokemon that have Unite Moves which have two parts. Using Charizard's Seismic Slam as an example, the first time you use the move it will fly you up in the air ignoring the map's obstacles. Its basic attack increases for a period of time, and if you press the Unite Move again, you'll perform a Seismic Slam. Snorlax's Power Nap has a similar effect, letting players roll an additional time if they press ZL after using it once.

Unite Moves also provide you with 3 major buffs on use! Your movement speed will increase by roughly 20% and your attack speed by approximately 30% for 5-7 seconds after using your unite move. You will also be granted a shield for about 10% of your HP. Don't forget about these important effects after using your Unite Move!

You can also get an an additional damage boost or a shield stack-up by equipping the Energy Amplifier and Buddy Barrier respectively. Having these items on your Pokemon will assist you in gaining an advantage in team fights and be able to defeat the opposing Pokemon faster.

Items Which Are Affected By Unite Moves

There are Held Items that help to increase your Unite Move's effectiveness and provide more support to your team. Having these items will also grant you an advantage in teamfights, and therefore objectives.

How To Speed Up Unite Moves Cooldown

Defeating Wild Pokémon will reduce the waiting time for Unite Moves by about 5% per Pokémon. The Unite reduction rate is the same if you manage to defeat Boss Pokemon. Take note that the Unite cooldown reduction does not apply when defeating your opponent Pokemon.

When To Use Unite Moves

Unite Moves are highly recommended to be used in group battles. Using Unite Moves with a wider range may deal greater damage to your opponents and may possibly defeat them all at once.

Although there are Unite Moves that deal damage to a single target, you should still use them in group battles. Defeating a single Pokemon can instantly change the course of a group battle and could be a chance to win.

Use Them During The Last Few Minutes

Group battles most often occur in the last few minutes of a match - mostly in attempts to score a few more goals or to defeat the Boss Pokemon Zapdos. The final stretch of the fight begins at 2 minutes, when Zapdos spawns!