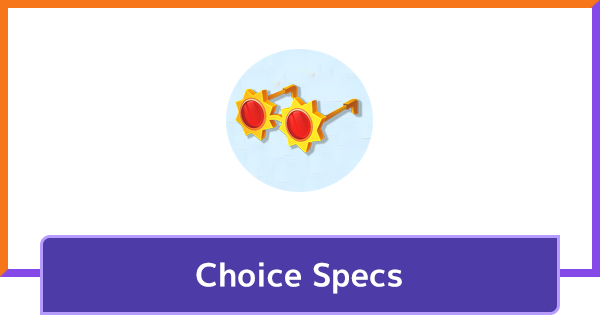 Pokemon UNITE | Pokemon MOBA
Choice Specs - How To Get & Stats

Choice Specs - How To Get

Choice Specs - Effects & How To Use

Choice Specs buff your Pokemon's moves. Once its effect triggers, it requires 8 seconds to refresh and trigger its effect again. This bonus damage only affects Sp. Attack and other factors such as Battle Items that buff Sp. Attack are also taken into consideration when calculating the overall damage.

Same Effect For Every Move

The bonus damage that Choice Specs inflict is based on the Pokemon's Sp. Attack stat. This means that you can expect the same amount of damage whether you use a strong or weak move.

Choice Specs also work with normal attack-type Pokemon as they also have Sp. Attack stats. However, do not expect the additional bonus damage to be high as it is heavily reliant on the value of the Sp. Attack stat.

Is It Better Than Wise Glasses?

Wise Glasses greatly increase a Pokemon's Sp. Attack stat, affecting both normal and move damages. On the other hand, Choice Specs' main use affects only moves. Using both together can significantly raise your Sp. Attack stat, allowing you to deal far greater damage with the damage bonus granted by Choice Specs.

Wise Glasses - How To Get & Stats