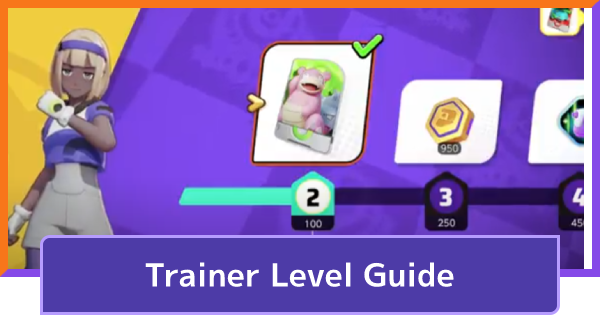 Trainer Level Up will unlock functions and rewards in Pokemon Unite (Pokemon MOBA). Learn about how to level up fast, how to farm Battle Points, trainer levels rewards, & unlocks!

How To Farm Battle Points

How to Level Up Trainer Level (Battle Points)

When you first log in to the game, prioritize completing the Tutorials as they come out. Doing so will give you quite a bit of Battle Points & other rewards to start you off. It is recommended that players do not skip this step!

Though it's somewhat obvious, the best way to get Battle Points in order to level up fast is to play matches. Whether it's a win or a loss, you will receive Battle Points for just completing a match in any game mode!

*Actual values may vary in the game.

Get Points For Playing In Ranked Matches

3. Use Marked Up Pokemon (Beginner's Bonus)

When selecting a Pokemon for a match, you may notice that some of them have an upward arrow symbol on the bottom right of their icon. This indicates that you can get a Beginner's Bonus for an additional 50 Battle Points for using these Pokemon!

Currency Types & Items That Can Be Purchased

What Is Trainer Level?

Trainer Level is the general progression of your account and determines which features you have access to. It is a progression-based tutorial & reward system aimed at letting players gradually get the hang of the game while earning rewards in the process.

Ranking up your Trainer Level will not only give you rewards, but will also unlock new functions in the game like Ranked Battles. Players will only get the full game experience when they fully max out the Trainer Level.

The Energy Reward system is unlocked at Trainer Level 6 and is Pokemon Unite's own mini-gacha where players can pull different items for rewards. You'll be able to pull using Aeos Energy which you can start accumulating as well.

Not To Be Confused With Ranks

"Ranks" usually refer to the result of ranked battles & their corresponding cup tier levels. They represent the competitive side of the game & require dedication to increase, unlike Trainer Levels which will increase naturally through completing in-game content.