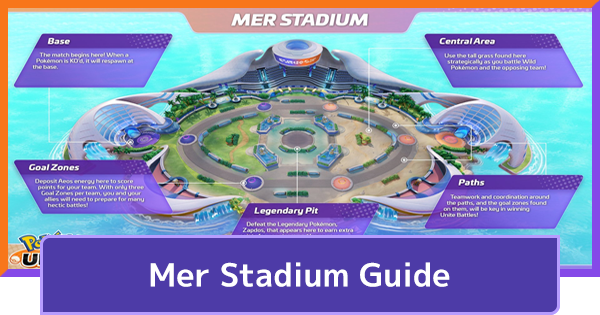 What Is Mer Stadium?

One Of The In-Game Maps

Mer Stadium is one of the featured maps in Pokemon Unite. The map is similar to Remoat Stadium but smaller and it also includes the set of Wild Pokemon and Boss Pokemon found in Remoat Stadium. It is accessible in Quick Matches only.

Mer Stadium can only be played on the Quick Match mode, lasts only a total of 5 minutes just like Shivre City & Auroma Park, and has generally 3 goals for each team than a Standard Battle Mode game.

Max of 4 Players Per Team

In Mer Stadium, teams are only composed of 4 players each. You can expect to see the same gameplay as regular matches, but with fewer players, only 3 goal zones for each team, and only 5 minutes of match time.

There are 6 Goal Zones in total, 3 for each team. The map is similar to Remoat Stadium's gameplay, defend your goal zones and destroy enemy goal zones.

To destroy an opponent's goal zone, you'll need 60 points to destroy it. Take note that this is for both the top and bottom goal zones.

Both The Salac & Sitrus Berries Are On The Map

The Super Jump Pad can also be used in Mer Stadium similar to Remoat Stadium, it can help you back in the field and is much faster compared to just walking there.

These Pokemon are normal mobs which can be found all over the maps. They can be beaten quite easily and will give EXP and Aeos Points. EXP will level up your Pokemon while Aeos Energy will allow you to score and win goals.

Defeating Zapdos Will Give You 20 Points

Upon defeating Zapdos, it will give you 20 points if you dealt with the final blow and once Zapdos has been defeated, the enemy goal zone will be defenseless and you'll be able to score a goal quicker. Note that unlike Standard mode, Zapdos actually respawns on this map!