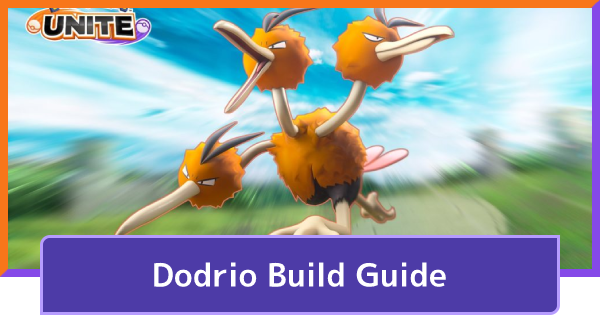 Dodrio Dashes Into The Arena This September 14! New!

Triple the trouble means triple the fun with Dodrio. This new Speedster is here ready to race into the new Theia Sky Ruins with its dashes and quirky moves! Scoring gets a lot easier as well with Dodrio's new mechanic that lets you score thrice the number of points in the goal zone. Check out the link below to know more about Dodrio and its speedy tricks!

Move As Much As Possible

Dodrio's dash gauge fills up as it moves and when it's full, its movement speed increases as well. When you stop moving, the dash gauge drops, so keep moving as much as possible.

One full clear of the middle lane (jungle) will let you hit level 5. This is crucial, as it will give you access to another offensive move. It's not recommended to attempt ganking other lanes until you're at least 5!

Dodrio's high mobility makes it challenging for opponents to catch up to it. Use it it to steal Exp from defeating spawns in your enemy's side in the middle lane and aim to score the accumulated points to destroy the opposing team's goal zones.

Do Not Over Extend On Fighting

Although Dodrio specializes in melee fights its endurance is quite poor, thus it cannot stay in close proximity to fight for long. Use its fast movement speed to flee from disadvantageous situations.

Dash abilities can be used not only to jump at enemies but to run away from them. Depending on your settings, your cursor will likely hover over an enemy first, so you'll have to manually adjust it in the other direction.

Once you've got your Bouffalant Buff and are level 5, head over to an available lane and attempt a gank. Don't overextend or fight on top of the enemy's goals unless you're sure you can get a kill!

Dodrio can excel at 1v1 battles but may struggle when stunned and attacked by multiple sources. Make sure not to force Dodrio to fight alone if you are at a disadvantage, it's a good idea to keep applying pressure from a distance.

A way to reduce the cooldown of Dorio's moves is to trigger its Sprint Gauge when it's full then use it to charge towards an opponent. Keep in mind that you need to make sure to hit them to be able to keep Dodrio's momentum when doing combos.

Since Dodrio has a different scoring method than its peers where instead of shooting points only once, it separates it into three. The final points dunked triggers the effects of Held Items that are correlated with scoring, so keep that in mind when you plan on stacking on bonus effects.

This Dodrio's build focuses on increasing movement speed to charge the Sprint Gauge and maximize the damage potential of Drill Peck. Agility enables Dodrio unstoppable by negating hindrances and provides increased movement speed that enables it to charge its Sprint Gauge faster. Once the gauge is full, Dodrio can dash forward while attacking with its sharp beaks multiple times, dealing damage to opposing Pokemon it hits and shoving them in the process.

This Dodrio move set is great for bursting down one target at a time by isolating them with Drill Peck then using Jump Kick to further deal damage and decrease their movement speed. Once Drill Peck is upgraded, Dodrio can also recover some HP each time it hits its target increasing its survivability especially during crucial team clashes in the late game.

You can use Triple Trample to charge forward and shove an enemy while also inflicting them with damage. Once activated, Dodrio's movement speed and attack increase as well for a short time, making it easier to eliminate fleeing targets. On top of that, Dodrio gains a shield to protect it from taking damage for a short time.

Take Out Squishies Near Zapdos

In the late game, you'll almost always have a confrontation with the enemy team at Zapdos. It can be tempting to fight Zapdos head-on, but this is best left to your bulkier All-Rounder and Defender teammates. Instead, hang around the edges and wait for enemy squishies to approach. Then, use your high mobility to jump in and eliminate them.

Pokemon Dodrio Is Weak Against

How To Play Against Dodrio

Pokemon Dodrio Is Strong Against

Tips When Allied With Dodrio