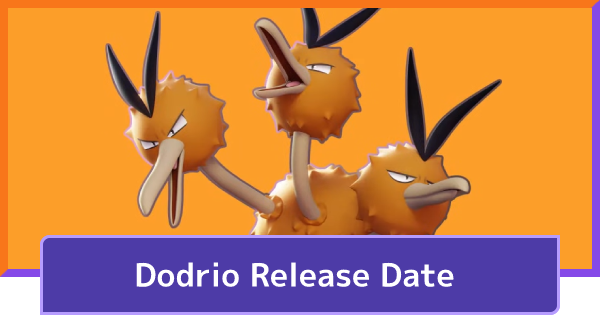 Announced To Join This September 14

Dodrio is set to join the fray this September 14, 2022, as announced at the 1st Anniversary Event. The new Pokemon will be released as part of the second phase of Pokemon UNITE's first-anniversary celebration!

Dodrio's Unite License price is not yet revealed so stay tuned for upcoming news regarding this.

Dodrio's movement and scoring were heavily emphasized, implying that mobility is its strongest asset. After the trailer, it was later confirmed that Dodrio will be a Speedster, a role that hasn't been updated since the game's first release!

Possible To Be A Team Jungler

With its innate agility, Dodrio can easily move through the middle lane and quickly navigate the surrounding obstacles within it to hunt Wild Pokemon before ganking enemies or scoring from other lanes.

It was unveiled that Dodrio can shoot up to three times when scoring. It seems it might be a new mechanic and feature exclusive to Dodrio. It's possible that scoring is its biggest suit making it a key character in matches.

Jump Kick is Dodrio's first officially announced move. Dodrio kicks out in a jumping move. When it comes into touch with an opponent or an obstacle, it hops over it and stomps the ground, damaging nearby targets and briefly reducing their movement speed.

Outrun Enemies With Speed Up Ability

Dodrio can run away from its pursuers with its passive ability that increase its movement speed and enables it to sprint through the lanes. Dodrio can take advantage of it to get in and out of fights easily.

Triple Trample has Dodrio run to a designated location. While running, Dodrio is immune to hindrances, and if makes contact with opposing Pokémon, it deals damage to them and throws them into the air. When Dodrio reaches its destination, it receives buffs!

What Kind Of Pokemon Is Dodrio?

Introduced As A Flying Pokemon In Generation I

Along with three heads, it possesses three sets of hearts and lungs. This helps it to efficiently oxygenate and circulate blood throughout its body, giving it the ability to sprint long distances without stopping. It is especially can be seen racing furiously through grassy plains, even during drought seasons with minimal rainfall.