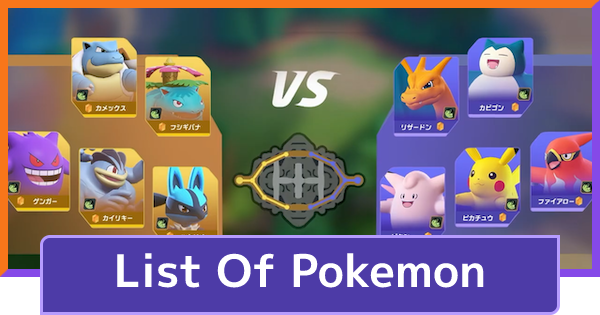 Check out this Pokemon list of all playable Pokemon in Pokemon Unite (Pokemon MOBA). Includes full roster, Playable characters, difficulty, and role of each Pokemon!

The newest Defender in Pokemon Unite, Blastoise, is now out! An incredibly tanky Pokemon with a great number of crowd control moves, Blastoise can be a reliable ally or a fearsome foe. To use Blastoise, you must either buy it using Aeos Coins or Aeos Gems

22 Pokemon Available In The Full Release

With the addition of Blissey on August 18th, Pokemon Unite will have a total of 22 Pokemon available for play. Note that Zeraora is still obtainable for free until August 31st just by downloading the game, so make sure to get it ASAP!

Blastoise Not Yet Available

Check Out The Latest News On Unite Here

Hello,
Not Yet In The Game misses Chansey/Blissey, because this Pokémon all files are in game like it is with Gardevoir and Blastoise, so after Blastoise probably Blissey will be released as 3rd Pokémon after release.

I don’t know if they’re confirmed yet, but I believe they have released images featuring Cinderace, Greninja, and Garchomp