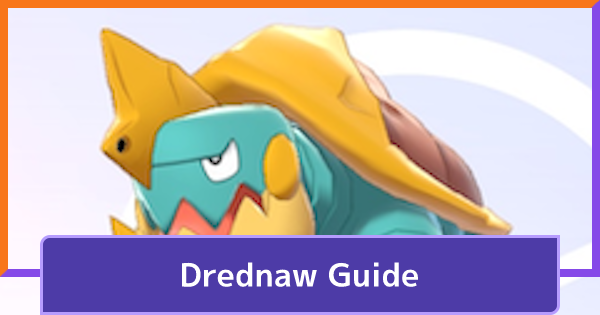 Drednaw has received some balance adjustments in the October 20th patch. These take the form of a reduction in the overall exp and shield provided by Drednaw when it is defeated. As you can see the in the above video, the reduction isn't massive, so it's likely that the first Drednaw of the game will still be the most important objective.

Drednaw - Effects & How To Beat

Shields The Whole Team When Beaten

Drednaw is a boss Pokemon that provides a defensive shield & exp to your entire team (regardless of their location relative to Drednaw) for a short while when defeated. The shield seems to absorb at least 15-20% of your maximum health worth of damage.

Although it received a nerf in a past patch, Drednaw still provides a huge chunk of experience when defeated. Defeating it will often be enough to level up your Pokemon (though this depends on your level at the time). This can be huge in getting your team their Unite moves before the enemy!

Overall damage done to Drednaw doesn't matter - what matters is who gets the last hit on it. For this reason, it's best to eliminate all enemy players nearby before attempting to finish it off!

The current Meta is deeply focused on defeating Drednaw as many times as possible. Top players will always be rotating bot at 7 minutes to accomplish this. In order to better understand the metagame of Pokemon Unite (especially at higher ranks), we've compiled a list of the Pokemon top 100 players use the most. Check out our Meta rank article for more info.

You may be thinking, "What about Rotom?". Rotom can also be a good objective to take if you are unable to contest Drednaw from the enemy team. Prioritizing either Wild Pokemon depends on the current state of the game.

Found At The Bottom Lane

Icon Shows Up Upon Spawning

Shows Up 7 Minutes Into A Match

Drednaw has a set spawn time in every match. At the 7 minute mark, it along with Rotom will spawn in their designated spots.

Despawn In The Last 2 Minutes

Drednaw and Rotom will despawn after Zapdos appears in the last 2 minutes of the match. You'll have from 7-2 minutes (in-game) to defeat Drednaw as many times as you can!

In the current meta, prioritizing Drednaw will cause your team to gain an EXP lead that can be used as leverage against your opponents. Try to immediately group up and defeat it after it spawns at the 7-minute mark. It's ideal for at least one player from the top lane to rotate bottom during this time as well.

Although the main draw of taking Drednaw is the incredible amount of exp it offers, its shield can still be useful for helping you clean up other Pokemon that might still be in the area.