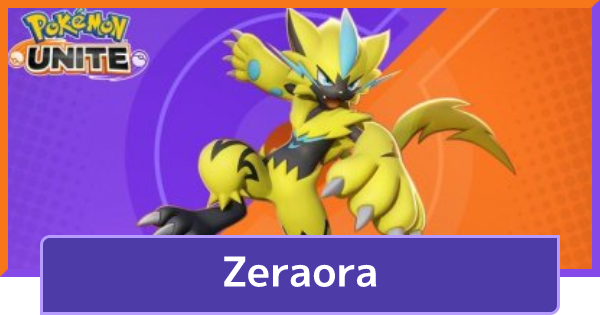 Zeraora Changes & How To Get

Zeraora received some nerfs & bug fixes on the December 9th Patch Update. Discharge and Plasma Gale's damage decreased while some bug issues from Spark's control and Wild Charge have been fixed.

Zeraora received a bug fix in the October 20th Patch, relating to how Wild Charge would sometimes cause more damage when hitting multiple opponents. This bug fix is effectively a nerf to Zeraora, though it's not clear how significant it will be.

Zeraora has received a few updates in the previous patch. Slash, Spark, and Wild Charge have received substantial damage buffs while some of the moves have had their cooldowns reduced. Overall this should be a buff to Zeraora's overall performance.

Zeraora has been affected by the latest patch with some nerfs and buffs to its skills. Its Wild Charge skill has been buffed with its cooldown dropped from 12 to 11 seconds. In contrast to this, its Plasma Gale skill has received a nerf in the form of damage reduction. The Spark skill's bug has also been fixed.

Compete with others & win the match 32 times to get Zeraora's Unite License as the Zeraora Mission is available for new players after August 31.

Spark + Discharge For Ease In Battle

Spark, a move that Zeraora learns at level 6, has a long range and can be used up to 3 times in a row. This gives you the ability to ambush an opponent from a distance, or keep attacking an enemy that attempts to run away.

Discharge is a powerful, easy-to-use AoE move learned at level 8. Not only does it excel in damaging opponents, but it also grants a shield while further inflicting damage on those that are paralyzed in the vicinity. Note that Zeraora's third Basic Attack can paralyze enemies, so aim for a combo to maximize this move's effect.

This build uses Zeraora's fast moving Volt Switch to get in then Wild Charge to deal damage. If the fight gets too hot, you can activate Volt Switch again to go back to your previous position. This allows you to poke enemies without being punished for overcommitting.

Wild Charge Can Help You Dodge

Wild Charge makes you invisible in the battlefield as you fly around dealing deadly damage. Use this if you see an enemy closing in to attack you with a devastating attack to dodge.

As mentioned above, this build requires Zeraora to do multiple skills in a short span of time. As this is a complex combo, it may take some time to get used to.

As this build is incredibly fragile, look for lone Pokemon to hunt. Do not try to engage Defenders as you will surely lose due to their incredible staying power. During the latter stages of the game, go around and flank to hunt enemy Attackers to win clashes.

Volt Switch For Dashing Around

You can get in and out of unfavorable battles or simply re-position yourself on the map when you use Volt Switch. You can also inflict damage on enemies you pass by and get faster basic attacks during this move's duration. This makes moving around the lanes much faster.

Level up faster by quickly clearing the jungle lane with Discharge. It stuns nearby enemies within its AoE range by paralyzing them and pulling them closer for Zeraora to use its Melee attacks! Pair this with Volt Switch to farm faster and get the upper hand by snowballing enemies.

This section has basic tips and tricks that you must know to effectively control Zeraora. Treat this as a supplement to the Beginner's Guide.

This section is for those looking to up their play with Zeraora. Consider this a supplement to the Advanced Players Guide.

For your Level 1 skill, choose Slash. Choosing Agility grants Zeraora great mobility but unfortunately no sure way to deal damage. Use Slash to farm during the early stages & use it to take down Wild Pokemon.

Roam The Map Once You Reach Lv 5

Zeraora finds great use during the early to middle parts of a match. Once you reach Level 5, hunt down enemy Pokemon to hinder their progress. Use bushes and walls to hide your presence and coordinate attacks with your teammates.

Unfortunately, Zeraora's explosive power wanes during the latter stages of a match. Take advantage of your initial lead and use it to initiate or ambush enemies with your teammates. Try to prevent your enemies from gaining enough levels by keeping on the pressure!

Upon reaching Level 6, you will be given a choice to either get Spark or Volt Switch. While highly dependent on the situation, if you want to improve your chances of initiating and winning team battles, it'd be best to get Spark. Spark can deal damage 3 times, allowing you to deal a large amount of damage in an instant.

If the enemy team tends to group together during fights, getting Discharge is highly recommended. In order to maximize Discharge's potential, you must paralyze an enemy Pokemon with your normal attack's third strike in order to inflict paralysis. Even if you fail to paralyze, Discharge can still inflict a large amount of damage when used and timed well.

How To Use Unite Move: Plasma Gale

Plasma Gale deals a large damage to anything in front of Zeraora. It also leaves an area in which Zeraora's attack range and damage are increased. Pretty straightforward and easy to use as there is no charging time to execute it. Extremely useful when used during clashes or when targeting high-priority Pokemon like Attackers and Supports.

This high-powered combo is great for almost any situation and can rival any Attacker combo with the way it deals damage. Start with Spark to leap at your target to attack. Then, follow up with Discharge to deal damage to not only the Pokemon you initially attacked but also all other enemy Pokemon around that may have ganged up on you. This move is particularly great as it can paralyze your opponent at the end of the move - making it so much easier to KO them without breaking a sweat.

Although this build isn't as explosive as the Spark/Discharge one, you'll be able to maximize your mobility as both moves involve dashing and charging toward the designated direction. We recommend using Volt Switch first to begin your combo and then follow up with Wild Charge as this maximizes the number of attacks dealt with this combo.

During the start of the game, take advantage of the mobility of Slash and go over obstacles to quickly clear Wild Pokemon. Make good use of your offensive move and if you feel confident you can try to invade the enemy jungle after dealing with Bouffalant.

During the team fight at ①, contest and defend the Wild Pokemon from being taken by the enemy team. After this fight, go back to your base and redo the farming sequence that you did during the early stages. After clearing ④, you can decide to pressure the enemy mid lane.

Volt Switch allows Zeraora to go to a designated location while damaging those in the path. After the initial rush, you have 4 seconds to reuse Volt Switch to back to your original location. When attacking, take advantage of this instantaneous displacement and pressure the enemy while having a safe escape route as your plan B.

Zeraora's Unite Move Plasma Gale creates a zone of damaging plasma around the area where it lands. Fighting inside this zone increases the range of Zeraora's range attacks and buffs its damage making it incredibly useful during a team fight. Use this whenever you can but take note of your HP!

Pokemon Zeraora Is Weak Against

How To Play Against Zeraora

Pokemon Zeraora Is Strong Against

Tips When Allied With Zeraora

Number Of Attacks Increases When Conditions Are Met

The number of attacks in this combo is increased by 1 if you hit an enemy before using this move. This effect can be stacked up to 6 consecutive attacks.