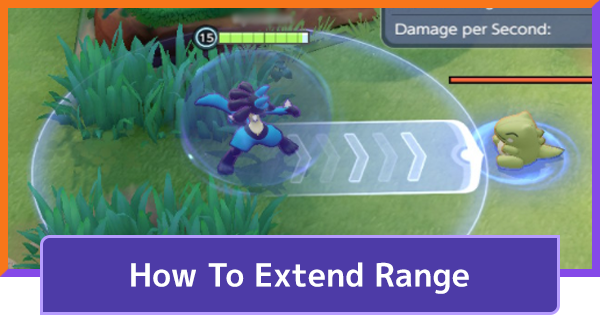 Read this guide to find out How to Extend the Range of moves in Pokemon Unite (Pokemon MOBA). Includes eject button tips, effect when combined with unite moves & more.

How To Extend Range & When To Use

The Eject Button instantly moves you in a specified direction, and can be used for dash attacks and area of effect attacks which change depending on your Pokemon's position. By pressing your Eject Button right after using an ability you can effectively extend its range!

Used When Opponents Dodge Your Moves

When you use a move on an opponent, it can be evaded by their Eject Button or other dash moves. An effective way to extend your range is to use this technique in the direction of your opponent if you feel they might attempt to evade your move. It is also effective to make a surprise attack so your opponent won't see it coming.

Avoid Using It Where You're Likely To Be KO'd

After using the Eject Button button to extend your range, you won't be able to use it for 70s. You'll have one less means of escaping, thus making you a vulnerable target. Make sure not to use it in situations where you'd likely get KO'd.

Best Attacks To Use This Method With

Unite Moves That Have An AoE Component

You can use the Eject Button to extend the range of a Unite Move that has a wide AoE radius. A perfect example for this is Blastoise & Snorlax. Their Unite Moves deal a lot of damage and are useful in many crucial situations, so extending their range is highly effective.

Some moves, such as Lucario's Extreme Speed, can be used again as soon as you hit an opponent. Even if you use the Eject Button, the move will become usable again. This is highly effective in extending the range of these moves!

Moves such as Snorlax's Heavy Slam are ideal for creating an opportunity for allies to attack in group battles. Jump in from long range and surprise the enemy team!