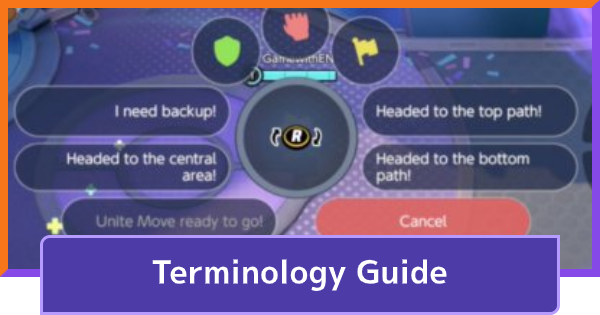 Check out a terminology guide for Pokemon Unite (Pokemon MOBA). Learn what the different terms used in the battle are, the specific meaning of these terms, a glossary, and more.

In order to communicate strategies and actions taken faster to your teammates, people often use abbreviations or other specialized terminology when speaking to each other. This is common in many game genres, but especially in MOBAs like Pokemon Unite.

You'll most likely hear these terms used when playing with others via voice communication software, such as Discord. Since Pokemon Unite doesn't have in-game chat, you won't see much of it in-game. However, it's still good to be aware of what all relevant terms mean.

This refers to the structure of the map. Typically players will stick to one lane for at least the opening stages of a battle. This consists of three lanes: Top, Bottom, & Center (also known as Middle).

Top, Bottom, and Center, are the locations of the lanes. Since Pokemon Unite only has 2 lanes with goals to defend, the center area acts like the "jungle" area where players farm for exp and roam to other lanes.

Temporary stat increase or bonuses such as shields granted by moves or by satisfying certain conditions. Supporters usually have moves that grant allies with additional stats for a short duration. Can give the recipient much that edge to win during a clash or team fight.

There's also a "jungle" area in Pokemon Unite. This is the central part of the map where you defeat wild Pokemon to gain additional buff and EXP. This is not an official term and is carried over from other MOBA games. Players assigned to the middle lane are sometimes called "Junglers". The jungle does not have a goal in which you can score points.

Farm or farming is the act of defeating wild Pokemon to obtain EXP (and perhaps additional buffs). You concentrate only on getting these EXP for leveling up, hence the term "farming".

Pokemon Unite also has 2 types of damage, Attack and Special Attack. Pokemon can deal higher damage when equipped with Held Items that have effects which match their respective attack type.

Basic Attack (or sometimes simply "normal") is a term used for the standard non-special move attack of a Pokemon. In the Switch version, this is typically the A button. You can change the priority of your normal attacks by tweaking the Settings menu.

Return To Base & Recall

There is also a feature in Pokemon Unite that lets a player teleport back to their base. Although returning back to base will take a short while, but once you have returned, your HP will be quickly restored. This is sometimes referred to as "recalling".

How To Recall / Return To Base

When you used a Move against an opposing Pokemon, it will go on cooldown. You will not be able to use the move again until this cooldown ends. Some Held Items and moves can shorten cooldown times.

This is a term used for a Pokemon that manages to score a goal first.

This is an area where Pokemon can hide. When inside, you are not be visible to enemy Pokemon outside the grass (though there are some conditions). This is useful for attempting to ambush/gank enemy Pokemon.

You can get assists when you help your teammate to defeat a wild Pokemon or opposing Pokemon. Take note that even you deal higher damage, it is the last hit which will determine whether you get a Knock Out or an Assist.

Roam refers to a Pokemon walking around the map by switching lanes to provide support to its teammates. This is in contrast to standing firm and holding one lane for an extended period of time.

This is the final move that deals the largest amount of damage and usually takes a longer time to become usable again. This is sometimes referred to as an "ult", or "ultimate" move.

This is a type of strategy to a team when they will initiate a suprise attack to the opposing team.

Area of Effect (AoE) refers to abilities that have a wider effect and target multiple opponents with one strike.

This is also known as a Hindrance in-game, and typically slows down, stuns, and impedes opposing Pokemon who get hit.

Pokemon that have high damage but low HP or Defense. As the name implies, these Pokemon can burst down any target but are incredibly fragile. In Pokemon Unite, glass cannons are either Attackers or Speeders.

Tanks are Pokemon that have high HP with exceptional Defense. These Pokemon also have skills that support or impede enemy Pokemon with crowd control moves. In Pokemon Unite, Defenders assume the role of tanks.

Tanking means to get the aggro of the enemy, taking their damage so that teammates can safely move or attack. Teams often use this term when attacking bosses such as Drednaw, Rotom, and Zapdos.