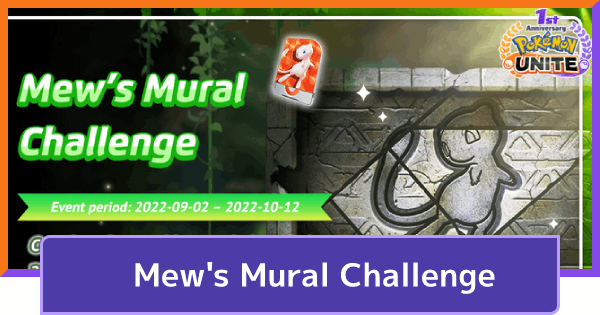 Mew's Mural Challenge is a limited event in Pokemon Unite. Know the full details of the event including the event duration, all event rewards, guide on how to complete and get Mew!

How To Get Mew

Mew's Unite License cannot be purchased at the Unite Battle Committee until the Mew's Mural Challenge finishes at October 13, 2022. It can only be obtained by completing Mew's Mural Challenge mission and collecting 6 mural fragments. After the event ends, Mew's Unite License can be purchased with Aeos Coins or Gems at the Unite Battle Committee.

Use Gems To Speed Up Progress

Mew's slate challenge basically progresses by clearing missions. However, you can also use gems to speed up progress. If you want to get Mew's Unite License quickly, use Gems to speed up your progress.

You may unlock various Mural Fragments by completing Mural Missions. Use Mural Energy to acquire each fragment after it has been raised to 100% in order to finally gain Mew's Unite License.

Get A Reward For Each Slate Completed

Use Mural Energy To Complete The Slate

You can use Mural Energy to 'slot in' fragments you obtain from Mural Missions. However, 1 Mural Energy is required for each Mural Fragment. Mural Energy accumulates by 1 every day.

Fast Way To Get Mew

You Can Ignore Some Missions

The Mural Challenge mission can be completed at 100% progress without completing each one of the missions. You can ignore the missions that take the longest to do.

Summary Of Missions You Can Prioritize

Other Missions You Can Do

Take Note Of These 2 Things

There are two main map locations where you can do Mew's Mural Challenge: you can either battle at the Theia Sky Ruins or in the Quick Battle. It is highly recommended to clear 45 quick battles and 20 wins. After that, keep fighting at Theia Sky Ruins until you complete all the remaining tasks.