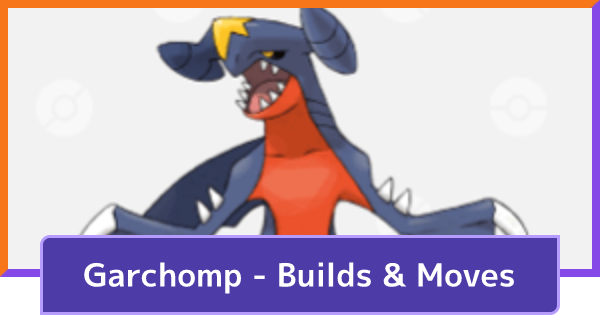 There have been major adjustments with Garchomp's evolution levels and movesets learned on the December 9th update. They decreased the levels needed to achieve to evolve from Gible to Gabite and Gabite to Garchomp. The stats were also adjusted along with the evolution levels. Garchomp's moves can also be learned at an earlier level, which can be an advantage for the Garchomp users to match up during teamfights!

Based on the November 10th Patch, Garchomp got a bug fix on its passive, Rough Skin, where its attack deals more damage than usual when hit by Zeraora's Wild Charge.

Garchomp has received some buffs in the October 20th Patch, mainly to its Dragon Rush move, which saw increased damage, and to its attack speed, which was increased. These are welcome buffs for the character, and will hopefully help it make its way up the ranks.

↑ A comparison of pre- and post-patch Garchomp's attack speed.

Garchomp received minor tweaks in the September 22nd Patch. His Rough Skin activation has been tweaked, and his Defense & Special Defense have been boosted.

Garchomp has received buffs across the board in the most recent patch, including changes to Bulldoze, Dragon Rush, and an increase to its overall movement speed.

Dig will let you get in and out of fights smoothly, all while dealing decent AoE damage. It couples well will Earthquake and will let you be a menacing presence at objectives.

Earthquake For The Combo

Earthquake works well when used right after Dig, as you'll be right in the middle of your target. This packs a huge punch and works too well to pass up. That being said, the directional dive from Dragon Rush can also be tempting in some cases.

Dragon Rush is a dash ability that will do a fairly substantial amount of damage and shove enemy Pokemon. It serves to disrupt enemies and let you get in the thick of things to take out squishy targets. Use this to stick to your main target.

Dragon Claw will deal more concentrated damage on a single target than Earthquake will. In addition, it has a slight CC element in the form of its throw. This ability can actually be combo'd with Dragon Rush by pressing them at nearly the same time. This will let you deal your damage in a wider AoE instead.

This build employs Dragon Rush instead of Dig, with the primary advantage here being that you can displace other Pokemon. This will make your role with this build a primarily disruptive one - engage in team fights and sow chaos among enemy ranks with your powerful AoE abilities.

This section has basic tips and tricks that you must know to effectively control Garchomp. Treat this as a supplement to the Beginner's Guide.

This section is for those looking to up their play with Garchomp. This is a supplement to the Advanced Players Guide.

Evolve As Quickly As Possible

Unfortunately, Garchomp is somewhat of a late bloomer. Expect to start relatively weak and become better as you level up. Aim to have evolved into Garchomp (reached level 10) by the 5-minute mark! You'll hit a huge power spike at this point, so it is important to prioritize this.

Try To Always Get Jungle Buffs

Garchomp can take full advantage of Jungle Buffs. In particular, the Orange Buff, which increases damage done to Pokemon with low health, is ideal for Garchomp.

Take Bulldoze first for the damage. If you're jungling, focusing on getting level 6/8 for your move-based power spikes. If you're in lane, play it safe in the early game, as you're very fragile as Gible.

Since it doesn't do damage, you might be inclined to ignore Sand Attack, but it actually gives you a not-insignificant movement and attack speed buff. Make sure you're using it on cooldown!

Dig is a multipurpose move you can use to close in on enemies or to simply disengage. You can be a bit more aggressive here, but you're not quite Garchomp yet, so refrain from unnecessary engagements and focus on farming.

Dragon Rush is a similar type of forward dash move that shoves enemy Pokemon. However, it has the unique property of being comboable with a later move, Dragon Claw.

Use Dig to close the distance to your foes then strike them with Earthquake. The more foes, the better. Note that when you upgrade Earthquake it will get a slow component, which can be very useful in teamfights.

This build has slightly more single-target burst potential. Charge in with Dragon Rush, then use Dragon Claw to knock back your target. Note that it's possible to combine these two, but it's not necessary to. Make sure to avail yourself of the attack speed buff after using Dragon Claw, as Garchomp's auto-attacks are some of the strongest in the game.

This section will guide you on which specific Wild Pokemon to target in order, as well as what to do at various stages of the game. This guide is based exclusively on a jungle build.

First of all, go over the wall to the central area by using the Eject Button and quickly head for the central area. We recommend learning Sand Attack as your first move since it increases your movement speed.

When you reach the bottom path, you should be level 5. Make sure to clear the Combees and Vespiquens in the middle first, and since Garchomp has no new abilities, it's best not to engage on your opponents and instead focus on attacking Wild Pokemon level up.

Until you reach level 10, Garchomp's damage and battle potential are quite low. We recommend that you don't attack too much, make sure stand at Earthquake's maximum range and try to prolong the battle against Drednaw, while aiming to reach level 10.

After you've reached level 10, Garchomp will be much more capable of holding its own in battle. Use Dig to get under a group of opponents, and use Earthquake to deal damage to multiple opponents. The Unite move will cause you to lose control of your character for a moment after using it, so only use it if you can KO the opponent.

Pokemon Garchomp Is Weak Against

How To Play Against Garchomp

Pokemon Garchomp Is Strong Against

Tips When Allied With Garchomp