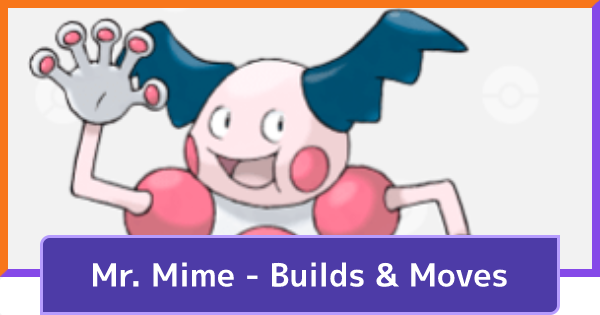 Mr. Mime has two bug fixes for the Sept 22 patch, which are fixes to the two above moves. In general, these can be interpreted as being overall buffs.

Although Mr. Mime's Confusion is a great move, Psychic has an upper hand as it not only damages all opposing Pokemon nearby but also lowers their Sp. Def in one go. This makes it easier for your allies to inflict more damage to your opponents - especially when they're coming in hordes. This move can help turn the tables when your allies are in a pinch and is particularly effective when several opponents are attacking at once.

Barrier, in theory, can be powerful, but in reality, can often be too small to be an efficient move as enemies are quite difficult to corner into narrow spaces. Most opponents will just pass through the sides and attack Mr. Mime directly. This is why Guard Swap is our move of choice, as it increases both your defense stats and your mobility - proving to be the more practical option in battle. This is especially useful for your survival when in a pinch. Another benefit of this move is that it deals damage to the opponent over time - hitting two birds with one stone.

Compared to the Confusion + Barrier build, this skill set is easier to handle as it doesn't require that many skill shots. If you're planning on using reliable Mr. Mime support, then best try this one first.

To sow confusion on the battlefield, Mr. Mime props up walls to prevent Pokemon from the opposing team from passing. This is incredibly useful as it can prevent escapes or pursuits if placed properly!

The More Barriers, The Better

Mr. Mime can prop up more Barriers the more it levels up. Make use of these Barriers to hem in or wall out enemies. You can also use them to block choke points! However, some skills allow Pokemon to pass through the Barriers so be wary!

Confusion To The Wall

A great combo to this build is to build up a Barrier, then use Confusion to push enemies towards the wall. This stuns the enemy Pokemon while also inflicting huge damage. Incredibly useful, letting Mr. Mime shine during team fights.

Setting up Barriers is no easy feat as you have to manually arrange them based on your position and angle. This makes controlling Mr. Mime somewhat complicated so it might take time for you to master it. But if you do take the time to play this build, you and your team will definitely thank you for it.

Get Psychic In Battle

Mr. Mime can blast enemies with its Psychic abilities and lower their Sp. Def for a short time, with a chance to stun them should they get hit by the blast twice. This makes them vulnerable to Mr. Mime's following basic and burst attacks from allies.

You can prevent other Pokemon especially melee-types like Machamp from getting near and using their moves like Submission on Mr. Mime with Barrier. You can also use this to trap enemies in nearby walls or on fleeing targets to stop them from escaping and ultimately finishing them off.

Mr. Mime can get offensive with its Confusion by striking directly anyone in front, inflicting damage, and pushing the enemy. The unfortunate receivers at the end of this move can get stunned when they get shoved and hit an obstacle, making them vulnerable to burst attacks. If the opposing Pokemon is presently guard-swapped, it won't get pushed but will suffer additional damage from this move and will be rendered inactive for a brief period of time.

Use Guard Swap to change the Defense and Sp. Def stats of your target with those of another. Swapping with an opposing Pokemon deals damage over time and decreases its movement speed while increasing Mr. Mime's movement speed for a short time.

This section has basic tips and tricks that you must know to effectively control Mr. Mime. Treat this as a supplement to the Beginner's Guide.

This section is for those looking to up their play with Mr. Mime. This is a supplement to the Advanced Players Guide.

Although Light Screen is a good move that's easy to use as well, picking Fake Out first is often the better choice. This is because Mr. Mime's overall offenses may be somewhat lacking at the start, so a move like Fake Out that shoves enemies away as it attacks can be convenient in close battles.

Generally Best To Support The Team

Mr. Mime is a good Supporter, so we recommend that you focus on this role by making a way for your teammates to deal with the last hit. You may have a hard time battling opponents independently given Mr. Mime's stats, so try to avoid close 1 on 1 fights & generally stick close to your team to support them in their battles in the early game.

Once you reach Lv4, you'll find Mr. Mime's offensive capabilities improve enough to deal considerable damage to opposing Pokemon. You'll get two great offensive moves - making combat easier for you in general. Mr. Mime works best when paired with another player, so don't stray too far from your allies.

Mr. Mime's moves have low cooldowns. Take advantage of the short cooldown times and constantly harass or screen enemy Pokemon when laning. Some moves like Barrier have charges so use them in quick succession if you have to.

At level 4 Mr. Mime has a choice between Psychic and Confusion. The one you choose will affect the direction of your build, so pick wisely. Although Psychic is generally recommended because it damages several Pokemon at once while debuffing them in the process, Confusion can be quite useful as well as it shoves Pokemon forward which could give you and your allies the opportunity to tip the scales.

You'll find that Mr. Mime gives powerful buffs and debuffs that could significantly aid teammates in battle. This build maximizes these abilities and can be quite lethal if used well. Begin by attacking with Guard Swap to debuff the opposing Pokemon and swap their defense stats with your own, and then quickly follow up with Psychic to lower their defenses even further and render them unable to attack for a short period of time.

Although this Mr. Mime build can be difficult to execute, it can be quite useful in battle if your aim is to corner enemies into situations where they'd be unable to attack. Begin with Confusion to attack the opposing Pokemon and shove them toward a tight corner or pathway, and when successful, quickly use Barrier to prevent them from passing through. Follow up with another hit of Confusion to damage them further.

When supporting an ally attacker, make sure to use Barrier to block targets from stealing objectives and prevent them from escaping the area as they get burst down with attacks. Follow this up with Psychic to lower their defenses to make them vulnerable to the blasts' damage and can potentially stun them when they get hit by multiple blasts.

Start off with Guard Swap to lower their defenses and movement speed while increasing Mr. Mime's. This also makes them vulnerable to your next follow-up attack. Use Confusion to deal damage to your unfortunate target. Since the opposing Pokemon is currently guard-swapped, it will suffer additional damage from this move and will be rendered inactive for a brief period of time.

How To Use Unite Move: Showtime

Showtime is a great offensive move, attacking all Pokemon nearby and stuns them temporarily. Mr. Mime can use this either offensively or defensively, depending on the situation. The last hit stuns enemies which can help your team get more attacks in - it's important to be on the same page with your teammates when this move is used.

This section will teach you which specific Wild Pokemon to kill in order, as well as exactly what to do at various stages of the game. This guide is based on the Barrier/Confusion Build!

At the start of the match choose Fake Out as your first move, KO the Aipoms first then head to the middle of the route. Since it's a support type, give the last hit to your allies.

Once you've reached level 4 you'll be able to get the move Light Screen which can be very useful to block your opponent or can be used to escape. Mr. Mime doesn't evolve and it has high fighting ability in the early stages. Attack your opponents on the other side to gain exp and even attempt to score a goal.

Using Confusion increases your damage while it disables other Pokemon when they hit an obstacle. You can also use this to block your opponents from getting near or use it as an escape plan.

After Defeating 1st Drednaw～End Of The Match

Mr.Mime's Unite Move lets the user jump from their target location and start a performance that deals damage over time, leaving opponents unable to act after. This move is most effective during Team Fights as it prevents multiple opponents from using their Ults first and making them prone to burst attack when they are stunned. It also has a short cooldown interval so you can use it often to take advantage in group battles.

Pokemon Mr. Mime Is Weak Against

How To Play Against Mr. Mime

Pokemon Mr. Mime Is Strong Against

Tips When Allied With Mr. Mime