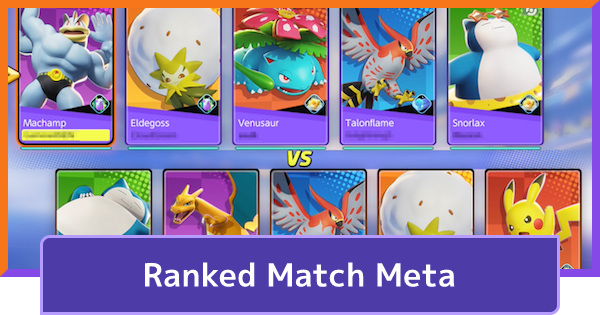 Most Used Pokemon In The Current Ranked Match Meta

This list represents which Pokemon are being used most by the top 20 players in-game for the week of February 28 - March 6, 2022 It also features the overall win-rate of each Pokemon. It is intended to give you an idea of which Pokemon are most commonly encountered in high rank.

Every Master Rank trainer has their own set of strategies in the battlefield, and a large component of that is their build! We've made a list below of Master Builds of the top 150 players in the game so you too can reach the top and be one of the best players out there!

Common Pokemon & How To Counter Them

※ The Pokemon listed below are just some of the most common ones in high rank (Master) play. Other Pokemon are also viable.

For this season, the Pokemon above have a higher likelihood of being seen in Ranked Matches. Note that these are the Pokemon with the highest representation, but it doesn't mean they're the only Pokemon used. You shouldn't feel pressured to use only these Pokemon, but you should know how to play against them.

While it's possible to perform well with almost every Pokemon in the game, some are clearly favored in the current meta. It's a good idea to stay cognizant of what Pokemon are currently strong (pay particular attention to Balance Patches). That being said, when playing ranked, always go with what you're best at.

Another excellent way of learning how to play against specific meta Pokemon is to watch other people play! Spectating high rank games is a good way to see how others approach playing certain characters. We put out articles that feature interesting plays on a weekly basis, so make sure to check them out if you're interested!

Effect Of The March 15th Patch

In line with the release of the new Pokemon Duraludon, the new March update came with buffs & nerfs to some Pokemon and items in the game. There are also bug fixes, spec changes, text fixes, event updates, and shop updates.

Effect Of The February 24th Patch

Effect Of The January 20th Patch

The new January update came with bug fixes, spec changes, text fixes, and shop updates. Aside from the newest addition of Trevenant's Unite License, there have also been several changes to Pokemon & Battle Items currently in the game.

Effect Of The January 20th Patch

The new January update came with bug fixes, spec changes, text fixes, and shop updates. Aside from the newest addition of Trevenant's Unite License, there have also been several changes to Pokemon & Battle Items currently in the game.

Effect Of The December 20th Patch

The newest Balance Patch on December 20 came with bug fixes, spec changes, and text fixes. In addition, the update also came with adjustments to the Matchmaking system, Dragonite's Unite License, Battle Pass Season 4, and updates to the shop with a variety of Pokemon Skins & Trainer Skins!

Tsareena Nerfs Not Enough To Keep The Queen Down

Although Tsareena's Triple Axel received a nerf due to it initially dealing a ton of damage, it doesn't really seem substantial enough to cause the Pokemon to drop down in the ranks. Players are still likely to go with Triple Axel due to how powerful it is in KO-ing opponents & important Wild Pokemon such as Drednaw & Zapdos.

Zeraora's Spark received a huge nerf from 4584 to 1230 (About 73.1%) - a change big enough to have affected the gameplay of a lot of users in the game. This caused Zeraora to fall in the ranks of this week's games.

In the current meta, stacks (organized groups) of multiple players are extremely common. In fact, it's often a huge advantage to queue up for ranked with friends. We strongly recommend doing this, as other players will likely be doing it as well.

Swap Speedster For Another Attacker

A common tactic many teams are employing is to not run a Speedster and run another Attacker instead. In this case, you can have either the All-Rounder or an Attacker jungle instead.

Lucario and Greninja are the two most common ones, but it's also possible to run Cinderace or Machamp mid as well. The advantage here is that these Pokemon are more useful later game and will benefit from getting the massive exp in the middle lane. Consider running these in the Jungle at some point.

The current meta is seeing a lot of emphasis placed on participation in teamfights. Higher ranked players will have their rotations on point and won't be tunneling their lane. In this meta, objectives in the early game are far more important than scoring - this is particularly true for Drednaw.

Currently, prioritizing Drednaw is extremely common. This is because it will grant your team a huge EXP lead that will help you in later teamfights. Try to immediately group up and defeat it after it spawns at the 7-minute mark. It's ideal for at least one player from the top lane to rotate bottom during this time as well. It's okay to let your tier 1 goal fall if it means securing Drednaw!

What Are Ranked Matches?

A Place To Test Your Skills

Ranked Matches are the main way you measure your skill in Pokemon Unite. Here, you get to fight against similarly ranked players to increase your rank. The higher you rank, the more skillful your opponents become. Ranked matches are also seasonal, so the best players may get some exclusive rewards once the season ends.

Ranked Matches are not immediately available when you start Pokemon Unite. You have to reach Trainer Level 6 in order to unlock it. Also, you need to have 5 Pokemon Unite licenses to be able to join.

How To Level Up Fast Guide