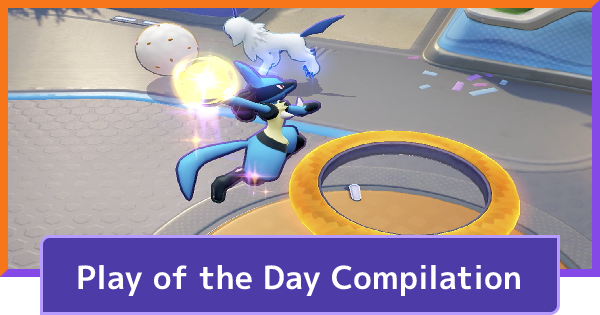 Check out this compilation of the Plays of the Day from the past week in Pokemon Unite (Pokemon MOBA). See a list of some of the best plays we found in the past week!

Play of the Day Compilation

Compilation Of The Week's Plays

October 12th Play of the Day

Picked Solar Beam by accident but that led me to my first ever penta kill so that's cool #PokemonUNITE #NintendoSwitch pic.twitter.com/wXEonPOMoM

This play from Pudds caught our attention because, despite accidentally picking up Solar Beam (before it was buffed), he managed to use it to his advantage. Getting the KO on Lucario allowed him to level up and pick up his Unite Move, which he swiftly learned and used without hesitation - nice job!

October 13th Play of the Day

This Blastoise play was clutch - waiting until the final moment when 3 enemies were in range to use the ult, getting the shield and using the powerful passive ability damage boost to wipe the floor. This was a good showcase of Blastoise's strength!

October 14th Play of the Day

This Lucario play showcases its incredible potential, being able to hold its own vs 3 enemies. Vaguelyellie's great usage of Power-Up Punch and Close Combat really shines in this clip.

October 15th Play of the Day

This play really showcases why it's important to never give up - even if you lose Zapdos! Though it's possible they still lost the game, what we like about this is the perseverance. This play stopped ~140 points from being scored, and is quite commendable!

October 16th Play of the Day

I know I tend to post clips of me bodying people I'm a few levels above, but I'm particularly proud of this outplay, especially since I missed the ult. #PokemonUNITE #NintendoSwitch pic.twitter.com/t6D1ALtzy7

Despite missing the ult, McMayhem comes out on top in this play! What's key here is his usage of Greninja's 3rd enhanced auto attack - when done in melee range, it deals more damage. Goes to show that even if you miss, you might still get by if you're determined and don't give up!

October 17th Play of the Day

An excellent overall play from Electricneb, capping a huge 100 points and then immediately running into take out the entire enemy team. The usage of the Eject Button to get there faster was also crucial!

October 18th Play of the Day

This Slowbro play demonstrates the great power of Surf. What's more however, is the way Jourmorenist expertly uses Telekenesis to buy time. Had he not done this, the Snorlax's damage would have likely KO'd him before Surf came off cooldown! Great play.

October 19th Play of the Day

Gardevoir may not be super popular, but it is strong! This play from ShinyPanda demonstrates how powerful Gardevoir's unite move is, and how it works so well in combination with its other moves. Shoutouts to the Blissey for the support as well.

October 20th Play of the Day

An excellent display of patience from Valtreous. Biding his time before running in to steal the Zapdos for the win! Despite being Seismic Slammed by Charizard, he still manages to get the KO and escape with style!

October 21st Play of the Day

This is play is equally funny as it is impressive. Using Dive to jump in the grass to avoid being seen, Ryanr fires off Cramorant's infamous sniper ult, decimating the enemy team, and winning the Drednaw. Apparently, the enemy team surrendered immediately after this, making this a game winning ult!

October 22nd Play of the Day

This play comes from the early stages of Greedent's release, and should serve as a lesson for players on what NOT to do when playing vs. Greedent! Namely, don't stand in one place after it uses its Ult - immediately run away, as its damage is overwhelming. Great job to Raai for this play.