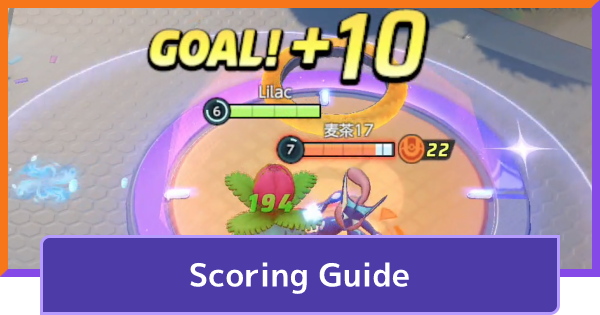 Check out this Scoring Guide for Pokemon Unite (Pokemon MOBA). This includes scoring stats, how to score points, how to stop enemies from scoring, how to get points, & more!

The Team With Most Points Wins

Winning in Pokemon Unite is pretty straightforward: whichever team has the most scored points at the end of the match wins! This is a team score, meaning it adds together all the goals carried out by each member.

How To See Team Score / Points

Every time you defeat a Wild Pokemon, you receive points if you do the last hit on it! You can know how many Points a Wild Pokemon would give by the number displayed next to a yellow Pokeball above them.

Normal Wild Pokemon can give you between 3 to 5 points for defeating them. Boss Pokemon on the other hand give 20 to 30 points, but requires more effort to defeat.

You don't get points directly when defeating an enemy Pokemon. Instead, they drop their points in the form of yellow orbs. Pick them up to add their points to yours!

Target Enemy Pokemon With The Most Points

It's a good strategy to target enemy Pokemon who are hoarding a ton of points. You can check which enemy has the most points by the number displayed next to the orange Pokeball icon next to their health bar!

Don't be too greedy with your points! It's ideal to score them as soon as you can to prevent enemies from stealing them! Remember that when you're KO'd, a portion of your points will be dropped.

Points Won't Count Unless Scored At A Goal

Points earned from defeating Pokemon do not count towards the team score unless you deposit them at an enemy goal. You can check how many points you've accumulated through the Pokeball at the bottom of the screen.

Having Multiple Allies on a Goal Zone Increases Scoring Speed

If you and other teammates stand in an enemy goal at the same time, your goal-scoring speed will actually increase! This incentivizes pushing together with your team, so make sure not to leave them hanging if you think there's an opportunity to push your foes off.

Gain Exp Upon Scoring A Goal

Players gain a bit of EXP whenever they score a goal. The amount of EXP earned will vary depending on Pokemon level and the amount of points scored, but it's estimated to be around 15% to 20%.

In addition to getting EXP when scoring, players also become invulnerable during the cast animation and get healed after scoring! This can be used to dodge enemy attacks, but timing would be a key.

Unite Move cooldown is reduced by around 10% whenever a Pokemon scores a goal. Unite Moves are essential for team fights and scoring is a viable way to to get it back up from its long cooldown time.

Goals Are Destroyed When Filled With Points

When the point limit is reached in a goal, the goal will be destroyed. Each goal will display scored point progress through the ring around it and a number displayed below the goal. This greatly helps in the long run as the enemy team's safe zone gets smaller the more goals you destroy.

Double Score In The Last 2 Minutes

Scores are doubled once the timer hits the last 2 minutes.. Take advantage of this opportunity to increase your team's points quickly and even possibly turn the tables in a losing game!

Maximum Number Of Points You Can Hold For Each Level

The maximum amount of points you can collect depends on what your current level is. The higher your level, the more points you'll be able to hold at a time. The maximum of 50 is unlocked at level 12.

Some Held Items grant buffs whenever you score a goal. These are a must of any primary scorer build. The buffs are applied even if you just score one point in a goal.

Players regain health while inside any of their team goals. By destroying enemy goals, enemy Pokemon are more vulnerable to being KO'd since they won't have bases to heal in!

Be Careful About Destroying Goals

Try to avoid destroying a goal before your teammates can score. For example, if you have 50 points, and your 2 partners have 20 and 10 respectively, but the goal in front of you only has 40 HP left, make sure to let the other two score first. If you fail to do so, you'll effectively lose 30 points.

Score When Opponents Aren't Around

When enemy Pokemon are in your line of sight, they will be displayed on your minimap. You can use this to monitor their location and check when it's safe to score a goal. It's ideal to score points when enemies are not in the vicinity.

Score Casting Can Be Interrupted

When a Pokemon that's charging up to score gets damaged, it will interrupt the scoring and they will need to start the charge up time again. Keep this in mind when scoring since enemies could even KO you when you're casting.

Prevent Enemies From Scoring In Your Goals By Interrupting

On the other hand, you can use this to your advantage when defending one of your goals. When you see them starting the scoring charge, throw an attack to stop them and possibly even push them back.

Your opponents are likely to dash towards you when taking over their goal. Use your Pokemon's movement skills to escape from trouble. This is recommended especially if your chances of defeating the enemy are slim.

Slowing Field In Between Enemy Goals

If you try to go beyond the goal closest to your side without destroying it first, your movement speed will be slowed down! It's not ideal to stay in there since enemies could easily take advantage of the debuff and KO you.

Rotom is one of the boss Pokemon that spawn during a match. When captured, it will head to the nearest enemy goal of the team that defeated it. Once there, it will apply a buff that makes all scoring instant for a few seconds!

In Standard & Ranked Battles, Zapdos will appear during the last 2 minutes of the game. When defeated, it provides the team that defeated it will receive points. It will also make all opposing team goals vulnerable! This could easily win you the game or set your team up for a comeback!