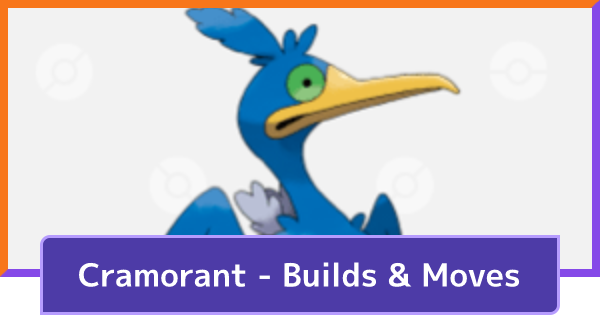 Cramorant will receive a bug fix on the October 20th Patch, featuring a fix a bug with the move Dive, where Cramorant's sprite may not displayed correctly.

Cramorant has seen several changes, many of which constitute a nerf to some of the most common builds. Surf and its unite Move were nerfed, while Dive and its Enhanced Basic Attack were buffed.

Cramorant has seen a minor bug fix in this patch. This is not a nerf and will likely result in an overall smoother gameplay experience.

Cramorant received a few minor changes this past patch. Dive damage was slightly increased, while Whirlpool has seen a slight decrease in overall effectiveness.

Both of these moves are excellent and will require a bit of personal judgment as to what to use. We recommend Air Slash, as the cooldown reduction element on it will provide you with more overall damage. Hurricane, however, is a potent CC ability which might work depending on your team composition.

Although Dive's mobility aspect is good, using it offensively means putting yourself in serious danger, which isn't ideal. In general, we recommend always picking Surf, as it's the safer option.

Hurricane For The Utility

Although you'll get higher overall damage by spamming Air Slash, Hurricane provides you and your team with some precious crowd control. This can be especially useful as Cramorant is rather lacking when it comes to tools that let you escape.

Note that Air Slash is much easier to land, so if you find yourself missing too often with Hurricane, you should consider swapping.

With the help of its Held Items, Eldegoss can jump into the fight to lead the team. The increased HP coupled with the additional Defense stats can greatly boost Eldegoss' chances of surviving or at least lasting longer during a scuffle. Remember that the longer Eldegoss stays in during the fight, the harder it is for the enemy to maneuver.

Cramorant can push back crowds from goal zones and objectives with Hurricane. Depending on the situation, you can use this to shove away enemies attacking your allies or isolate key Pokemon from your enemy team so that your team can then burst it down.

Aside from dealing damage, you can use Dive to change your placement on the map especially during team fights. Its fast cooldown rate also enables you to use it more often, making tactical positions in battle easier. You can hide in bushes before using this move to surprise unlucky targets.

This section has basic tips and tricks that you must know to effectively control Cramorant. Treat this as a supplement to the Beginner's Guide.

This section is for those looking to up their play with Cramorant. This is a supplement to the Advanced Players Guide.

Focus On Leveling Up

During the first half of the match, your main focus should be leveling up as quickly as possible. Cramorant will really hit its stride at level 6 when you can get Surf. Avoid unnecessary engagements and save Whirlpool to guarantee a list hit on Wild Pokemon!

Whirlpool can deal devastating damage if a Pokemon lingers in it. It will be essential in securing the last hits in the early phase of the match, so make sure to use it wisely!

With Feather Dance, you can decrease the Attack and movement speed of an enemy. A great setup to either finish off Pokemon that area trying to flee or have a Pokemon flee while the debuff is active.

Air Slash Is The Safer Bet

Air Slash is an incredibly powerful attack that lets you jump back after attacking. You'll find this very helpful when fighting against melee Pokemon. Its cooldown is very low, meaning it will be up almost every time you need it.

Enemies caught in Hurricane are effectively hindered from doing any action while they are caught in it. They will then be damaged when they are thrown after the move's duration. If your team is lacking in CC, consider running this! Note that it will do less damage overall than Air Slash, though.

For this build, attack first with Surf and enter the wave to get a Pokemon. Use Normal Attacks for the additional damage, then use Air Slash to reposition and damage enemies.

This build lets Cramorant function as a bit of an assassin, knocking up foes and then charging in to finish them off. Note that overcommitting as an Attacker and diving right into the enemy Pokemon without a way out can be very dangerous, so only play this build if you're confident in your ability to escape.

This combo works well as it really locks down an enemy for an extended period of time. You can use either move first, but just be careful that your Surf doesn't knock your target out of the Hurricane before it goes off.

Cramorant's Unite Move is a double-edged sword as it does massive damage but also leaves you immobile in its duration. It's best to use Gatling Gulp Missile when you have a nearby ally to protect and defend Cramorant during its vulnerable situation. Make sure that you can confirm a KO on your targets when using this so it won't backfire on Cramorant.

Use The Surroundings To Your Advantage

Map awareness can be a huge advantage especially when you want to avoid getting ganked and ambushed by enemies. You can use this to strategically position yourself to corner your opponents - preferably on nearby grass bushes to surprise attack targets. Use Cramorant's moves to immobilize enemies while your allies can attack them aggressively while stunned - giving your team plenty of opportunities for a massive KO streak!

This section will teach you which specific Wild Pokemon to kill in order, as well as exactly what to do at various stages of the game.

At the beginning of the match, we recommend choosing Whirlpool as your first skill, as this move is unbeatable in terms of getting last hits. It also lets you hit the 3rd & 4th Aipoms at once!

Cramorant can get the last hit on wild Pokemon with ease by using Whirlpool. Target Wild Pokemon on your opponent's side and aim for Level 6 before the Drednaw fight.

Try to CC your enemies either with the move Surf or Hurricane - this will open up a window for allies to attack your opponents! If your ally isn't nearby, save your moves for last hitting instead.

Cramorant's Unite move has a very long range. Using it in the vicinity of Drednaw or Zapdos is a must, as it will either pressure your enemies away, or actually net you the last hit.

Pokemon Cramorant Is Weak Against

How To Play Against Cramorant

Pokemon Cramorant Is Strong Against

Tips When Allied With Cramorant

Blastoise needs to be added to the counter list. It's impossible not to die to a Blastoise when it uses rapid spin. Cramorant should avoid blastoise at all costs.