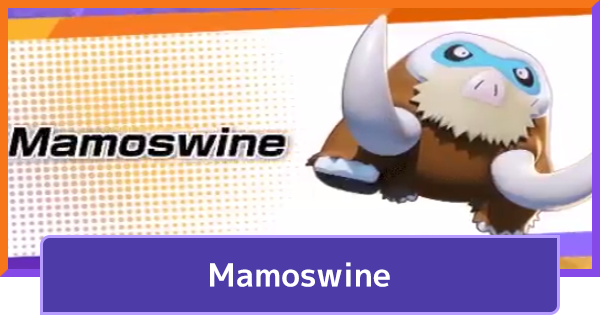 Mamoswine received major adjustments with the evolution levels, stats, and moves learned on the December 9th Update. Mamoswine's required level to evolve decreased, while the stats were adjusted to fit the changes. The moves learned were also matched up with the evolution and stats, which aids in giving Mamoswine more of an advantage at an earlier stage compared to before.

This build focuses on using your abilities to crowd control enemies, and even reposition them! After you a hit Pokemon with Ice Fang, you can toss them in a particular designated direction! This means you can throw Pokemon into your teammates. Earthquake also acts as a good way to crowd control a larger number of enemies.

This build focuses on isolating key targets with Ice Fang and having you and your teammates burn it down. For this reason, you could choose to forego some defensive items and include a Muscle Band here as well. We recommend the Razor Claw because of the extra burst it provides.

The Icicle Crash + High Horsepower combo will make it so you drop a patch on the ground that boosts ally movement speed. In addition to this, the combo of using HH to stun foes inside your Icicle Crash area is very potent. Doing this in a goal will also cause the ice patch to reduce enemy goal scoring speed as well!

Mamoswine freezes its fangs to scoop and throw its opponents in the battle arena, dealing damage and leaving them unable to act for a short time. This is a great move to isolate and block enemies from scoring. When this move is used near the goal zones, it can freeze the area making the scoring charge slower.

High Horsepower To Charge Into Battle

Mamoswine rushes recklessly into his opponent in any direction and shoves them, dealing damage in the process. Mamoswine then stomps its feet, attacking anyone in the area of effect and leaving them unable to act for a short time. This stomping deals increased damage to frozen Pokemon.

Mamoswine can get aggressive with its unfortunate targets by dropping icicles on them, dealing damage in the process, and decreasing their movement speed for a short time. The final icicle shatters after a set amount of time dealing another additional damage and leaving anyone in the area of effect frozen for some time.

Shake up your enemies with an Earthquake! Mamoswine leaps up and then land forcefully in the ground, creating tremors that deals damage to anyone caught in the area of effect and pulling them in. This is great for isolating and bursting down enemies so they won't escape Mamoswine.

This section has basic tips and tricks that you must know to effectively control Mamoswine. Treat this as a supplement to the Beginner's Guide.

This section is for those looking to up their play with Mamoswine. This is a supplement to the Advanced Players Guide.

Early game Mamoswine (as Swinub) will be all about securing last hits with Ice Shard & Tackle. Tackle can also be saved to harass enemy laners. If you can distract the enemy enough for your lane partner to get the hit, you should consider that a win as well!

Although this rule applies for all Pokemon, it's particularly important for Mamoswine. Its third basic attack will freeze enemy Pokemon! This can be combo'd up with other moves that freeze, so it's important to always be monitoring your basic attacks! If you're not sure how to check out the visual indicator for empowered attacks, check our settings article for more info!

You will evolve into Piloswine and get your first move at the relatively late level 6. It will be important to stay aware of enemy power spikes to decide if you should engage. In general, it's better to hang back and get experience in preparation for the 7:00 Drednaw fight.

Level 8 is when you'll get access to your second move, allowing you to pull off more effective combos. You should try to aim to get this before the first Drednaw fight (7:00) if possible (though it won't always be).

These two moves have a very important interaction to note: Shattering the icicle with High Horsepower will cover the ground in ice, increasing ally movement speed. Additionally, you'll trigger the Icicle's final effect (freezing the enemy) by doing this as well! Note that your buffed basic attack will also freeze, so you'll want to stagger these effects to maximize crowd control!

Although these two moves don't have a particular interaction, they can work well to isolate/crowd control a specific target. Engage with Earthquake to pull an enemy in. Then, hit them with Ice Fang and toss them behind you. This will proc your passive, letting you freeze the target again on your next auto attack. Provided you have assistance from your team, this combo should be enough to take out most Pokemon.

This combo pair works well for pushing away a group of Pokemon then isolating one to take out. Note that since Ice Fang will give you a boosted auto proc, you'll want to have one ready right when you charge in using High Horsepower.

This move pairing emphasizes AoE damage and crowd control. Hitting the Icicle Crash with Earthquake will of course cause it break and freeze enemies, but in addition to this, you'll have the pull-in effect from Earthquake as well. This will let you land auto attacks on the frozen target even faster.

How To Use Unite Move: Mammoth Mash

Mammoth Mash is a powerful move that will make you immune to hindrances temporarily and also deal damage! The best times to use this move are when enemies are clumped together. The ideal place is of course the Legendary Pit when facing Zapdos. If using the Buddy Barrier, remember that it also becomes a defensive cooldown for you AND a partner.

You can use either Ice Shard or Tackle to clear the initial Apom spawns. However, between the 2, Ice Shard has the higher damage making it easier to clear the rest of the spawns. With that said, it is recommended to get Ice Shard first so you can quickly clear your lane.

If you find yourself competing for Wild Pokemon camps with the enemy team, you can use Tackle to disable the enemy team, allowing your ally to land a last hit. Another thing is that battling Drednaw as a Level 5 Pokemon can be pretty difficult. Gain more experience using the top lane before heading towards the bottom.

As Mamoswine is a Defender with high damage resistance, always stay ahead of your team during a team fight. If you find yourself being critically damaged, use Tackle to escape and heal. Once you get Earthquake, try to be aggressive and land straight in the middle of the enemy team to go on the offensive.

Upon reaching level 10, Mamoswine's stats increases significantly and you also get access to its Unite Move, Mammoth Mash. Try to reach Level 10 as soon as you can by farming Wild Pokemon. As Mamoswine's Wild Pokemon clearing speed is not that great, it is best to clear spawns with an allied Pokemon.

Save your Unite Move for the final encounter with Zapdos. Consider saving the move to try to get a last hit on Zapdos. Given that it makes immune to hindrances, you'll likely be able to do massive damage unopposed. If you're running a Buddy Barrier, this will be even more true here.

Pokemon Mamoswine Is Weak Against

How To Play Against Mamoswine

Pokemon Mamoswine Is Strong Against

Tips When Allied With Mamoswine